Whether you do everything at this year’s Mix Sound for Film and Television virtual event or catch certain events and panels throughout the day, there’s a lot to hear, see and do. Make sure to network in the networking hall, dive into the exhibit hall to check out new products and live chat with exhibitors, and enjoy our sensational lineup of panels!

Here’s what’s happening at Mix Sound for Film and Television:

Thomas Dolby, a musician, composer, technologist, and now educator as head of the cutting-edge Music for New Media program at the Peabody Conservatory, and Sound Designer/Director/Producer Wylie Stateman, who just won an Emmy for his work on The Queen’s Gambit, chat about music, effects, composition, architecture and the role of the sound professional in What We Talk About When We Talk About Sound.

The Rebirth of Sound Design, With Balance and Space at the Mix

Sound effects, Foley, score, source music, dialog, ADR, backgrounds, field recordings, sample-twisting and electronic morphing—they all contribute to the art and feel of a film or television soundtrack. They are all part of the sound design. Meanwhile, from a technical perspective, re-recording is about creating space for music, effects and dialog to all speak. Artistically, it’s about weaving those three elements into balance—scene by scene, moment by moment—to fulfill the director’s vision. The line between sound designer, supervising sound editor and re-recording mixer is not always clear-cut, nor does it have to be, as discussed by our creative and technology-savvy panelists.

Sound for The Power of the Dog

Connection, Control and Playback: What You Need to Know Before Building an Immersive Studio

Upgrading a studio from stereo or 5.1 surround to a full-blown 7.1.4 or 9.1.6 immersive room is not as complex or intimidating as it once seemed. Nor as expensive. You do need to add Cat 6 cabling, increase I/O, upgrade your DAW, and add/configure speakers, along with associated monitor control. But with proper planning and a clear pre-design intent, setting up a Dolby Atmos stage can be painless. Through its RedNet product line, Focusrite has provided the immersive backbone for countless immersive facilities over the past decade, while Genelec has pioneered immersive monitoring setup, configuration and performance for 7.1.4 and 9.1.6 playback In this special presentation, the two companies are joined by representatives from Dolby and Netflix for a discussion about the foundations of studio setup through a look at real-world examples from Netflix Studios and the Genelec Experience Center.

The focus on integrated sound and picture—in production, post-production and distribution to the home—has been increasing over the past couple of years. Technology advances in projection and display technologies, along with concurrent leaps in immersive audio playback and distribution, have allowed talent in the two disciplines to work with high-res image and sound, throughout the creative process, approvals and on to delivery in multiple languages. Meyer Sound, world leaders in immersive playback monitoring and home theater systems, recently worked with Sony, Dolby and Netflix on a revolutionary new Ultra Reflex sound system for Sony’s emerging high-end direct view display system, effectively bouncing sound off the screen and using DSP to “project” a true immersive sound image In this special presentation, the team details how this state-of-the-art facility was put together and what it means for the future of integrated sound and picture production.

DPEQ allows for seamless integration of EQ and dynamics processing. Parametric EQ forces processing to be performed in the time domain, avoiding block averaging and modulation of STFT-based systems in order to support fast and robust dynamic reaction. This talk moves beyond these base advantages to explore ways DPEQ can assist in the post-production of media audio content. We discuss how DPEQ can be used to tame the mixing of several independently recorded sources into one soundtrack, in addition to how DPEQ can equalize for more arcane characteristics such as acoustic conditions of recording. We address the application of DPEQ, as manifest in the product Quartet DynPEQ, to multichannel tracks and buses without harming spatial information in spite of it being a non-linear processor.

In March 2020, Hollywood edit suites and re-recording stages shut down. Sound editors, mixers, composers, chief engineers, assistants, recordists, boom operators and all those who support them were sent home, often in the middle of projects. But the content kept coming. The audience demanded it. With disruption comes change, and overnight, sound supervisors and post-production professionals were forced to look at their technologies, modify their workflows and still deliver stellar tracks—on budget and on time, most often collaborating from remote locations. In this expert panel of creatives and technologists, we explore how those processes have changed and we take a look at what’s in store for 2022.

Sound for The Guilty

Stealing Back the Time to Be Creative: Integrated Efficiencies in Post-Production Workflow

Lower budgets, smaller crews and less time per project is part of the new reality in high-end audio post-production, a trend exacerbated by the pandemic. While developing all-new workflows to accommodate remote and facility-based production, sound mixers and editors have looked for efficiencies throughout the turnover-conform-handoff-version-turnover process. If picture lock is slowly becoming a myth, then it’s even more important for sound teams to be involved early with the picture department. Here, re-recording mixer Eric Hoehn, CAS; VICE Media Group Head of Post-Production Mark Leombruni; and Durin Gleaves of Adobe discuss how they each save time by integrating the sound and picture process.

The 360 Virtual Mixing Environment (360 VME), which was introduced by Sony at the Sound for Film & Television event in September 2020, continues to evolve through use by sound engineers at the Sony Pictures Post Production Services facility. This technology became a key tool for remote sound mixing following the temporary shutdown of mix stages due to the global pandemic. Over the past year, 360 VME has grown and now supports other parts of studio productions and operations beyond post-production sound. In this panel, the creators and engineers utilizing the 360 VME Technology will share their stories of how the technology has helped their creative process. 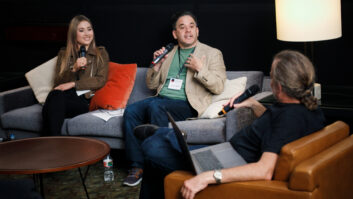