Austin, TX (November 14, 2017)—The Alamo Drafthouse theaters in Austin are best-known for their highly curated movie offerings and food, but there’s also drinks, bands and more, all intended to create a unique experience that keeps locals coming back. With that in mind, the chain recently updated the audio systems in its Highball and Barrel O’ Fun locations.

A/V Manager Steve Sanders tried out an Allen & Heath Qu-24 mixer and then doubled down on it, spec’ing it for both locations with an additional AR-2412 AudioRack for Barrel O’ Fun. Sanders saves a Qu-24 scene for bands who play at the Highball regularly. “When they come in, I just recall their scene,” he said. “That’s especially helpful on monitors where everyone wants a different mix. Also, I can’t always have a professional FOH person on every event, so if I have a manager or a projectionist working a simple show, I can set them up with a scene. Then, they can just focus on a few faders.”

That said, there’s usually an audio pro behind the desk, and Sanders sets up the Qu-Pad iPad app for FOH engineers who are unfamiliar with the room and want to walk around. Also, the Qu-24’s Qu-Drive feature allows recording via USB, so the venue offers show recordings to acts that provide a hard drive or thumb drive.

“The reason I dug the Allen & Heath board,” he said, “is because it just made sense to me and everything flows nicely. The EQs are nice and warm, it sounds great and we can mix monitors from FOH. I’ve worked on other digital boards since we got the Qu-24, but I still swear by it for what we’re doing.” 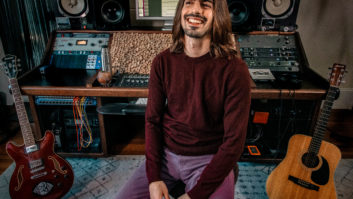