Dallas, TX (March 12, 2019)—Rising country newcomer Cash Campbell’s tracks may have racked up 20 million streams and views online, but he’s banking on turning those online listeners into real-world concert goers. Aiming to ensure they can hear every note, his current tour, opening for Dylan Scott, finds him carrying gear from Arlington’s B&L Sound and Lighting, which is supplying the tour’s complete control package.

“This has been my first experience with DiGiCo and, to be honest, I had been intimidated to use one because of how detailed you can be with it,” shares Bledsoe. “But after a short amount of time prepping on the desk as well as the offline editing software, I realized that detail is what I enjoy the most. Now I find that the workflow and sound of this desk make it hard to imagine going back to anything else. The SD12 is our console of choice moving forward.”

At each stop, the SD12 is connected to the SD-Rack over Optocore fiber and used in conjunction with a Waves SoundGrid Extreme Server and Shure PSM 1000 IEMs to provide monitors for all band members.

“With the prior tour leg being my first time on this desk, I started with a Waves plug-in on most channels, but quickly realized I could lean heavier on the console because the EQ is so usable, and the compression and de-esser are incredible,” said Bledsoe. “With each channel of compression having the option of being a multi-band, that’s super-helpful for drums and vocals as well.”

Bledsoe’s current patch list comprises approximately 40 inputs, with a few of those being for talkback mics on stage that come into the console and are routed to a SquawkBox at FOH. For IEMs, he delivers stereo mixes to each of the four band members—all of whom also sing—plus a mix to the band’s lighting director, and two stereo mixes for Campbell, one of which is fed to an additional IEM unit for guest artists as needed. 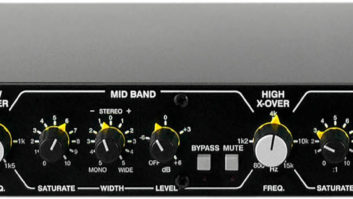