New York, NY (September 13, 2022)—Duran Duran wrapped up its 2022 U.S. tour on Sunday, closing out a three-night stand at the Hollywood Bowl in Los Angeles, but it was just one leg in a far longer trek that saw the group spend May through July hitting the U.K. and Europe this year. The band’s travels aren’t over yet either as the stalwart pop act is pegged to play two nights in Las Vegas at the end of October, just days before it is inducted into the Rock & Roll Hall of Fame and duly performs at this year’s Induction Ceremony. Tackling the band’s live sound needs at every show this year has been production manager Wob Roberts, FOH engineer Craig Pryde and the band’s long-time audio vendor, Britannia Row Productions.

For the band’s latest UK and European festival run, Brit Row supplied the crew with a DiGiCo-centric control package, as well as an assortment of microphones and Sennheiser IEMs. “Brit Row have been great in providing the gear we needed, at a time when so much equipment is unavailable,” said Roberts, who first worked with the band in 2008 and returned to the role last year. “Part of this was because we booked well in advance, but the following US tour was a late addition and our account handler, Dave Compton, managed to source the gear we need without having to ship anything, which is great as we try to reduce the carbon footprint of touring.”

FOH Engineer Craig Pryde first joined Duran Duran’s audio crew in 2017 and took over the house desk this year as the production moved to a DiGiCo Quantum 5. “We moved over to DiGiCo for this year, and they’ve been incredibly supportive, with the best back up I’ve ever experienced,” he said. “The change from the previous console was partly driven by production, as the DiGiCo desks are more widely available worldwide for one-off fly shows.”

Pryde specified a pair of Bricasti M7s to complement the AMS RMX16 500 series reverb that the band already own, as well as redundant Waves servers with SuperRack, MiLab mics on drums, and Sennheiser mics and IEMs for vocalists. “I’m also integrating Live Professor via SuperRack to host some non-Waves plug-ins like the Eventide 910 and H3000, as well as some Sonnox software and the Gullfoss EQ by Soundtheory,” added Pryde.

The crew had limited rehearsal time due to scheduling, which meant that they had just five days to work through the switch to DiGiCo. “I’m still learning new things every day, but the band have a huge back catalogue to pull from, which makes virtual playback a godsend,” he adds. “They’re a great band and are fun to mix. They’ll have a listen in rehearsals at arrangements and comment – especially with the new material or any of the new arrangements – but mostly they’re pretty hands-off.”

For many years, frontman Simon Le Bon’s vocal mic of choice was a wireless Shure Beta58A, though recent discussions with the band’s studio engineer prompted him to reassess the available options. “We eventually opted for a Sennheiser EM6000 receiver with an SKM6000 transmitter and a 935 capsule,” said Pryde. “It was a good choice, and he sounds great through it.”

Although monitor engineer Chris Miller had never used one of DiGiCo’s Quantum consoles prior to this run, he opted for a Quantum 338 to create the “dense, in your face, in-ear mixes” that the band favor. “I really like the screens and the layout of the 338, and the Mustard processing is great,”said Miller. “It allows me to stay inside the console without Waves or UAD, which I’m a big fan of avoiding, if possible. I use four RND 5045s to clean up background noise in the vocals, but that’s the only outboard I have. I also use parallel compression on all my vocals, with the Mustard and SD dynamic EQ just before. It’s a fantastic combination.”

With the exception of one subwoofer for drummer Roger Taylor, the band members use Sennheiser 2050 IEM systems and EM6000 wireless microphones. “The band know what they need in order to concentrate on performing, and they can communicate that to me quite well,” says Miller. “There is lip reading, hand gestures, and the occasional meeting after the show. Once we’re on the same page, we adjust, maintain and it’s on to whatever might be next. They’re a bunch of real professionals and it’s a pleasure to get to work with them. Good music and great source material remove most of the challenges we might encounter.”

Throughout the band’s travels around the globe, Brit Row has been there to answer the audio team’s needs. Pryde noted, “All of the gear has been really well-prepped, and the phone has always been answered.  Duran Duran are a true global band, so for continuity and quality of service, that requires a global rental company. Brit Row, as part of Clair Global, provide a totally consistent service around the world; the back-up is fantastic.” 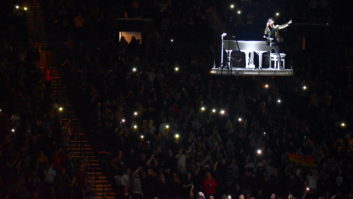