It turned into a package deal straight out of Hollywood: On Monday, July 26, Andre Perreault joined Complete Sound, along with the Miles O’ Fun editorial team and a brand new, two-operator SSL Avant console, shown here on the Sound for Picture cover.

“Complete Sound has enjoyed great success in sitcoms, television specials and DVD Mastering,” recalls Perreault. “With a desire to get into longform, they approached me, and when I saw the facility and met the staff, it was clear that, together, we could build a great future. The missing ingredient was editorial-when I suggested they speak to Miles O’ Fun, it really wasn’t a surprise to find out they were already in talks. In the space of one month we will be fully established in longform, with a room busy with three shows.”

So much has happened since Mix last visited Complete Sound in November 1997, when the facility purchased three SSL Axioms for its expansion into DTV. Building on that initial thrust, for the past few months the company has been fast-tracking a move into longform theatrical and television work. Twelve new editorial bays, linked by Ethernet, have been built in preparation for the Miles O’ Fun alliance. An OC-24 fiber-optic network has been installed, linking the audio facility with the DVD Center (video sync, sub-network for sound FX and AES audio running on dedicated fiber pairs). Additionally, Complete Sound provides 270MB D1 video/audio transmission.

Mix 3, where Perreault will mix with Ken Burton, is THX-certified for 5.1 with an Electro-Voice TS-992LX system for LCR, with 96 channels of playback off of Fairlight DaD units and recording to MFX3 workstations. Complete Sound’s Mix 2 has been outfitted for Dolby Digital EX, and Mix 1 has a high-center JBL on the screen and Genelecs for the overheads to do IMAX/Iwerks projects.

“Corporations are busy acquiring right now, but the trend is to forget the staff,” he continues. “The crews are on the street, and everybody is wondering what’s going on. Your closest relationship to your clients is your staff, and that’s one thing Complete has very high on their priority list: their staff. If you take care of your staff, they will take care of your clients.”

Although Complete Sound originally built the facility in anticipation of multichannel HDTV work, the past two years have found staff mixers, Tamara Johnson Bolm and Bruce Buehlman, working more on sitcoms such as Dharma & Greg, The Nanny, Moesha and Boy Meets World or DVD titles including Titanic, the Alien box set, The Longest Day andThe King and I. 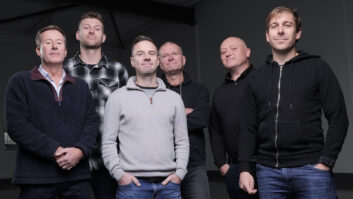