Listening to Dave Gahan and Soulsavers’ latest album, Angels & Ghosts, it’s hard to believe it was created between their home studios—all but the strings and horns. The production duo’s Rich Machin creates the string sounds using a digital string package, which he plays on a keyboard to work out the parts. These ideas, along with reference pieces—for example, an Ennio Morricone soundtrack from the late ’60s—is what Machin takes to renowned composer Daniele Luppi. Having worked with Luppi for years, Machin has become versed in strings.

“[Luppi] has taught me how to listen to records, break them down, and identify individual strings,” Machin says. “Before [Luppi], I didn’t have the knowledge to really be able to understand how you built up a string sound.”

These sounds are prevalent on Angels & Ghosts, with six out of the nine songs having strings and horns performed by The Hollywood Strings & Horns Ensemble, and recorded in Sunset Sound’s Studio 2 in Los Angeles. Machin’s orchestra sample melodies are first transcribed by Luppi, then adjusted by him for playability by the orchestra.

“Sometimes string samples play notes that are unplayable by real instruments or that don’t sound good that low or that high,” Luppi says. “The demo I received was piano chords with a clear and grounded main harmony and [Gahan’s] vocals, so there was a lot of room for ideas. For example, doing a completely different countermelody on ‘All of This and Nothing.’”

Luppi records the orchestra the same way every time, using a Decca Tree microphone configuration with three vintage Neumann U 47s for the Decca and U 67s for the close mics on each instrument. Furthermore, in that particular warm room, Luppi tracks the echo chamber in real time.

“I used a technique close to avant-garde and film music string writing, where instead of reinforcing the basic existing harmony, you alter it by exploiting the more unusual and odd notes of the chords,” Luppi says. “The effect is that the strings sound unresolved and add tension to the performance. I further divided the strings in very small groups so I could do more independent melodic lines, such as on ‘One Thing.’”

He continues, “The risk factor is that when you have such quiet and intimate material you don’t normally want to add complexity. When the writing and performance is strong, the arrangement can dare to do something especially sophisticated and unexpected.” 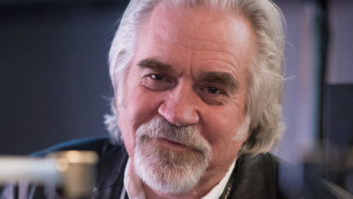