What hath Babe wrought? Ever since that cute talking farm pig who thought he was a dog captured the imagination of moviegoers everywhere back in 1995, we’ve been inundated by a procession of films, commercials and television programs taking advantage of advances in CGI technology to make animals appear as though they’re talking. Critters you didn’t even think had lips are suddenly flapping their computer-enhanced mouths to sync up with witty dialog. It has allowed filmmakers to move into terrain previously occupied primarily by cartoon animators and provided a bonanza for Hollywood’s suddenly in-demand animal trainers.

One of the most ambitious films in the genre is the just-released Warner Bros. comedy Cats and Dogs, which was shot in Canada by director Larry Guterman (Antz) and posted in L.A. at Weddington Productions, with Richard Anderson, Mark Mangini and Elliott Koretz leading the charge. “This is a really fun kids’ movie,” Mangini says. “It’s sort of like Babe meets James Bond. It’s a zany world, and from a sound perspective, there’s a lot of real broad, big, loud, obvious stuff going on.” There’s an evil, maniacal cat with dreams of world domination, clever and stupid dogs trying to foil him, a Siamese ninja cat and mystified human owners who are largely oblivious to the Ian Fleming-like plot machinations. In short, it’s mayhem on a large scale — and exactly what many of us probably believe is really going on with our felines and canines when we’re off at work or at home asleep.

Most of the movie takes place in the animals’ world, where the cats and dogs speak English and are given voice by the usual mish-mash of celebrities, including Tobey Maguire, Will & Grace‘s Sean Hays, Alec Baldwin, Charlton Heston and The Green Mile‘s Michael Clarke Duncan. Their parts were prerecorded cartoon-style and then CGI-animated (at a cost of roughly $40,000 per shot of face/mouth replacement). “There’s also been a huge amount of re-voicing and re-performing,” Mangini says. “When we thought a joke could be better, we’ve actually gone back and paid to re-animate, because we’ve got a better line.”

For the portions of the film seen from the human perspective (Jeff Goldblum and Elizabeth Perkins are the befuddled Homo sapien leads), the cats and dogs bark and meow the way we hear them in real life; the comic banter, intrigue and insults elude the hapless people. To capture real animal vocalizations, Mangini and recordist Eric Potter went to the L.A.-area animal ranch that supplied the dogs. “These are dogs that are trained to act, as well as speak, so we got lots of good material,” Mangini says. “These dogs were real troopers. They take visual commands as well as verbal commands, and they usually respond really well to the trainers.

“When you do a film like this,” Mangini continues, “you’re looking for certain vocalizations to match the film. So we spot the movie and go out with a list — ‘here’s the wish list of what we want’ — but the animals don’t always have that kind of range. You need barks, growls, whimpers, whines, yelps; that’s basically the kit that any dog has, and they don’t do much more than that. Except there was also a bloodhound in the film, and there you hope you can get a sort of Hound of the Baskervilles howl, but that’s really rare. You’ve got to get them really worked up, and we couldn’t get that. As it happened, the bloodhound that’s in the movie was having a bad day, and we couldn’t even get a bark out of him, so we went down the hill from that ranch to one of their competitors, and they brought in a blue tick bloodhound who was trained to speak, and he delivered the goods.”

Of course, the Weddington crew could take dramatic license and use any dog noises they wanted, but Mangini says this time out they wanted to stick with the actual animals from the film. Besides, if they’d used a beagle yelp on a Chihuahua, then someone would’ve complained: “You always hear from someone,” Mangini says with a laugh. “We always hear from gun owners and car owners — ‘No way that’s a ’65 Mustang, man!’”

Up at the animal ranch, “Eric Potter did the dog recording using a Sony D-10 Pro, a 16-bit/48k DAT recorder with a JLCooper preamp and the little Colette capsule Neumanns in a Windjammer rig,” Mangini notes. “He gets real good sound with that. To do dogs, one of the techniques he’s developed is he runs two mics in mono, one with a 20dB pad, because you never know what a dog’s going to do — it might whimper one second, which is a real low-level sound, and then it might bark, so you want to be able to get the range of it all.”

When we spoke to Mangini in early April, the real cat sounds had yet to be recorded, but he suggested that there would probably be less reliance on the actual animals from the film. “We have a very extensive library of great cat recordings, because there are a lot of cat lovers here. We have some really unusual cat sounds that will be perfect for this film.”

In his years as an SFX creator and editor, Mangini has worked extensively with animal sounds, so getting to do Cats and Dogs was a good fit for him. “Earlier in my career, I more or less created our animal library for the movie Gremlins. I just did tons and tons of animals for that — I did every animal under the sun, because I just didn’t know what they were going to sound like. So I went out to every ranch and park and zoo and recorded gibbons and macaques, elephants and badgers, even weasels! I tried everything. Animals are really fun to record. What’s interesting, though, is that animals in their natural environments don’t make much sound. They don’t chatter to each other like human beings, obviously, except for birds. Most of them only make sound when they’re in pain or in trouble, so you have to put them in a distressed situation to get sounds. So you would do things like separate mothers from their young for a few minutes.” Mangini is quick to add, however, that no animals were unduly distressed to capture sounds for Cats and Dogs. “Nobody was prodded or electrified,” he says with a laugh. “With the dogs, the trainers are really good at getting them to make noise, and, in general, dogs need less coaxing than a wild animal. Cats can be a little tricky…”

Mangini would probably agree that the toughest to deal with, though, are human actors. After all, they have agents, managers and egos. 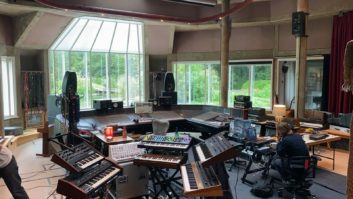