Alt-rockers Porcupine Tree released their latest album, The Incident, last month; this project is a cohesive yet complex song cycle inspired by significant “incidents” in the news and in frontman/producer Steven Wilson’s life. Sessions for The Incident took place at rural Monkey Puzzle House (Suffolk, UK) where Wilson says the band “holed up for four weeks, writing and recording. It’s great because you can’t even get cell phone reception. You really are very focused with no distractions.”

Wilson says he has arrived at a method of creating fully formed demos of the songs he writes. “If I hear something in my head,” he says, “I’m not the kind of person who just sits down at the piano or acoustic guitar and bashes out a song. I tend to hear things almost as complete pieces in my head. Then the process becomes the other guys systematically replacing my demo parts and my programmed drums and my feeble attempts to play the bass and keyboards with their real performances. But in a way we’re always working with a complete picture, and inevitably we end up using a lot of the stuff we do during those early stages because there was a certain chemistry and freshness we couldn’t re-create later. For example, I almost always keep the vocal I did on the demo.”

Further band sessions took place at AIR Studios (London), where the group cut acoustic tracks with engineer Steve Orchard. “He was fantastic,” says Wilson, who mixed the album in his home Logic/Genelec-based studio. “I don’t know a lot about mic choices and positioning, so I do very much rely on good engineers to know those kinds of things.” 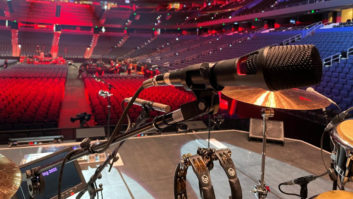