There was a moment a few years back, and again a few years before that, where Ian Schreier faced the career dilemma a lot of talented mid-market audio engineers go through: “Should I pack up and try Nashville? L.A.? New York? I’ve engineered a Grammy-nominated record. I think I’m good enough. But how would I make it happen? Would it work out? What would I be giving up?”

At the time Schreier had 10 years of studio work behind him, along with experience at everything from production at 5,000-seat festival venues to radio program editing to cataloging bird calls for a local professor—engineers outside the recording centers tend to get a well-rounded education on the job, doing bits of all things audio. Schreier certainly did, though the emphasis was always on bands, and had been since his drumming days before, during and after college, on the road and in the studio.

As is typical in engineer genesis stories, the last, best band imploded in the mid-1990s, and Schreier found himself drawn to the studio—to recording and sound. But he had just turned 30, older than most starting out, and he had no real experience beyond one semester of recording at Western Michigan while pursuing a music major, years ago. He had been working for 10 years in auto repair, financing his band life by moving his way up in a regional company. When the opportunity came for a promotion and a transfer, he declined. But he didn’t know what he wanted to do. His wife said to him, “You’ve always liked recording, why don’t you open a recording studio?” “The light bulb went off,” Schreier says. “I knew I could do this.”

He read everything he could on acoustics and recording philosophies and in 1997 opened Grooveworks Studio in Raleigh, N.C., in a space at the back of his house, with a Behringer console and ADATs. He gave away free time so he could learn, he started networking and taking on all jobs. He also worked part time at a production house doing live sound, something he credits with helping him to learn how to establish priorities in a tracking session or at a mix.

He also freelanced at studios around town, one of which, Osceola Recording, was going through an ownership change. The new owner asked him to come aboard full time—not as an employee, mind you, but as house engineer. He brought as many clients as he could, and he found himself behind a Sony 3036 console with Studer A800 2-inch. He stayed for 10 years.

While at Osceola, Schreier tracked and mixed bluegrass, rock, heavy rock, hip-hop, country, jazz and everything in between. Mostly local and regional acts. The room was just big enough to hold a four- or five-piece group. Sometimes he would pack in seven or eight. He developed a taste for recording bands live. One of those bands helped to affirm his career choice and got him thinking bigger.

“We were making the That’s Right record with Roomful of Blues, which was nominated for Best Traditional Blues Recording that year,” he recalls. “They are an up-tempo jump blues band. Horns. Like a cross between blues, rock and big band. A fun band live. I didn’t have any assistants on that session, so I get everything going, I hit Play and Record, and it immediately sounded like a record coming out of the monitors. I thought, ‘This is why I do this! This is what drives me!’ And the first song on the album is the very first take of the first song we recorded. Hitting it out of the park the first time. It was magic.”

But it also led to the career dilemma. Schreier was now in his late 30s, and he thought, “What if…?”And then he met Michael Tiemann.

Tiemann is a most interesting character, entering the music and recording business in a big way after a highly successful career in tech (one of the founders of Open Source computing). In 2008, he was roaming the area around Raleigh with drawings of his plans to build a world-class recording space 15 miles south of town. Tiemann and Schreier met at an industry event, and over the ensuing years, without either ever really expressing it formally, Schreier became the chief engineer at the Wes Lachot-designed Manifold Recording, starting around the time the gymnasium-size slab was laid. (You can read more about Manifold Recording at mixonline.com)

“One of the reasons that I work here as opposed to any other facility is that this environment was created to do two things: inspire great performances, and then capture them when they happen. The kind of recording I want to do, I finally figured out, is performance-based. So when Michael described his idea for the place, I got excited.”

Recently, Schreier hooked up with local singer-songwriter Sarah Shook, offering to waive his producing fee so that she and her band, the Disarmers, could record in a new way, live at Manifold.

“Sarah is an example of finding an artist who I thought had something special,” Schreier says. “We tracked the entire record in four days, totally live with the exception of the lead vocals. All the doors were open, the guitars were in the main room, so were the amps. Drums are in a booth with the doors open. Sarah is in a gobo booth in the middle of all this, playing guitar. It’s a musical conversation. They’re balancing themselves.

“And then there’s this great phenomenon when you start pulling up individual tacks and saying, ‘Man, it all sounds so good,’” he continues. “And then I pull up the room mics and everybody just hits the floor. It goes from a great recording to a record. It still blows me away. That’s a great room. That’s the sound of great records to me.” 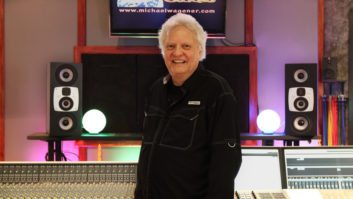