Though the RIAA did not request a specific amount, the funds would be used to create additional squads or units for a program called Computer Hacking and Intellectual Property — CHIPs — which is part of the Justice Department’s initiative to fight online piracy.

The RIAA said that the number of arrests and indictments for music piracy are up 113% from 2000 to 2001; meanwhile, guilty pleas and convictions were up 203% and sight seizures were up 170%.

In a written testimony, Frank Creighton, executive VP and director of Anti-Piracy at the RIAA, said, “We all have to find a way to come together and make sure that we are using the people’s resources and the tools of the law in a way that makes sense and gets results. We need more CHIPs units. We need IP to be a priority within these units. We need to explore creative approaches to creating appropriate deterrent levels on the Internet in coordination with private industry.”

Mix Daily News Archives for May 1-15 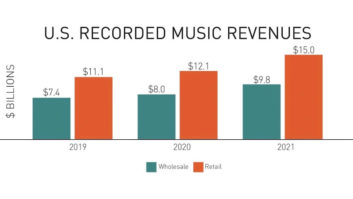