The X Factor will make its U.S. debut on Fox September 21, and Michael Abbott, owner of All Ears Inc., has chosen a Yamaha DM2000 for the broadcast mix of the audition phase of the production taped in Los Angeles, Dallas, Newark, New Jersey, Miami and Seattle. Sweetwater Video/NEP provided the audio/video facilities. The Simon Cowell–created show went across America to find the next global superstar or group who will ultimately win a $5 million Sony Music recording deal.

“The Yamaha DM2000 was chosen because The X Factor project required an audio console with a small physical footprint but with a large amount of audio I/O,” says Abbott. “We used six MADI slot cards that were fed into a Euphonix Studio Hub, then routed out to nine MADI streams and converted to AES via RME MADI/AES converters.

“The GUI of the Yamaha DM2000 console allows for control of four AD8HR preamps, allowing for 32 external mic preamp channels in addition to the onboard 24 mic inputs,” Abbott adds. “Also, the input/output patch library provides a variety of I/O mapping presets for the various stages of The X Factor production, as the input sources changed during the six weeks of production. The console’s Group Control function allowed for control of faders located on the lower four layers of the console surface.” 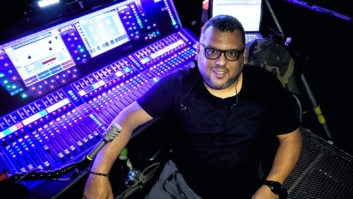