With a Memorial Day weekend debut, Disney’s much-anticipated Pearl Harbor seems a shoe-in for success. An epic love story set against the high action and drama of World War II, Pearl was produced by Jerry Bruckheimer and directed by Michael Bay, a team whose track record includes Armageddon, Bad Boys and The Rock.

Touted as the biggest-budgeted movie ever green-lit, Pearl reportedly came in at $140 million. On the sound front, battleships, guns, bombs, explosions, an entire arsenal of destruction had to be created — including circa 1940s aircraft.

Given that there are plenty of people still alive with strong memories of the sights and sounds of the second World War, the sound production team felt an enormous responsibility to be true to the era, and through their efforts, an amazing feat of reconstruction was accomplished.

According to supervising sound editors George Watters II, who signed on with Disney just before work commenced on the film, and Chris Boyes, the post-production team was determined, even before the project began, to be as authentic as possible.

“We read the script and looked at as much film as possible while they were shooting,” explains Watters on a brief break from dubbing at the Cary Grant Theatre on the Sony Pictures lot in Culver City. “I went through and made notes of every plane that we needed: B25s, German Messerschmitts, English Spitfires, American P40s and, of course, Japanese Zeroes. Every airplane sound in the film is brand-new, using the exact planes with original engines. We went out to the Planes of Fame Air Museum in Chino [Calif.] and several other small airports, and over the course of about three months recorded what we needed.”

Working with planes valued in the millions of dollars, Watters and the crew had to ensure that they were totally prepared. To do that, they essentially diagrammed every required shot. Then, working with the pilots who had flown the planes during filming in Hawaii, they attempted to re-create what was needed.

Interiors, fly-bys, dives and maneuvers were all captured by recordists Scott Guitteau and John Fasal, working with both exterior and interior setups. And, acting above and beyond the call of duty, members of the sound crew also went up in the aircraft.

“It was an enormous help to us to ride in the planes,” Watters continues. “We could put ourselves with the pilots and the gunners and the bombardier, and in the process of cutting, we could remember what we’d heard and observed. It’s incredibly loud; we had to wear helmets and earplugs. It’s also tremendously claustrophobic inside the plane, and you’re very aware that you’re in the middle of nowhere. There’s nowhere to hide, and it’s incredibly scary.”

Picture it: the roar of your plane, the whine of the enemy’s plane, bullets ricocheting and bombs exploding all around you. Not to mention screaming, with distorted commands coming rapid-fire over the radio. In a film this sonically dense, a main goal for the mixing team is to keep the soundtrack from dissolving into a wall of noise. “The visuals are so amazing, and so much information is on the screen at any one time, that our key challenge is to figure out what we want to hear and when,” explains lead mixer Kevin O’Connell. “You can’t hear it all at one time; it’s a difficult balancing act.”

“You pick your moments,” adds O’Connell’s longtime mixing partner Greg Russell. “If we can create a lower dynamic in the times where we can be quiet, the louder moments of the film don’t have to be that loud, and they still have strong impact.”

Mixed to the 7.1-channel SDDS format, Pearl Harbor is a true 8-track mix. “All the predubs were done with the format in mind, which is five across the front instead of three,” continues Russell. “That allows us to put different textures in different speakers, giving better clarity and separation, as well as more flexibility.”

In an innovative move, to deal with the enormous amount of sound effects, a separate 5.1 sound design room was set up at Bruckheimer Studios with Pro Tools, Pro Control and plenty of plug-ins. The director could then audition scenes in surround ahead of time.

“We were able to preview for Michael,” explains sound editor Beau Borders. “Sometimes he would come in and go, ‘Great, cool,’ and leave, and sometimes he’d come in and just shake his head, and we knew that we had to start from scratch.

“For instance, in the attack on Pearl Harbor, Michael’s first comment was, ‘I don’t like the Zeroes.’ Because, as it turns out, these planes really play as a menacing character. You can feel them coming, and when they rip by you they’re scary. While they were real recordings, there was a lot of sound design to make certain moments of these planes especially frightening. It sounded great cut for realism, but after we took it in the direction Michael wanted to, all of a sudden the planes became characters.”

All in all, the Pearl Harbor sound team is striving to live up to the expectations of those legions of World War II buffs, and especially to the memories of those who lived through it.

“So many of those guys voiced their hope that we were going to make it authentic this time,” concludes Watters. “They’d always been disappointed in films before, and they were tremendously concerned. The knowledge that they have is unbelievable and so was the help that they gave us. That’s one of the reasons we worked so hard on this film. I don’t think they’ll be disappointed. 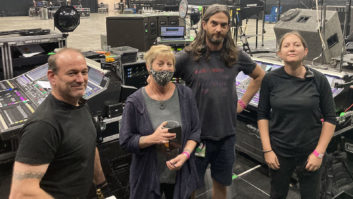