Figure 1: The stand-alone version of iZotope RX 2 Advanced. The right side of the GUI provides access to processing modules. Clicks in the audio file are displayed as three vertical lines in the center of the golden spectrogram, in which the floating waveform overlay is disabled.

The software comes in both stand-alone and plug-in versions. The stand-alone version includes a world-class spectrogram with floating waveform overlays and several processing modules that can be used either independently or in combination (see Fig. 1). The Declipper, Declicker & Decrackler, Hum Remover, Denoiser and Spectral Repair processing modules included in the stand-alone version can also be instantiated as separate DAW plug-ins in RTAS, AudioSuite, VST, MAS, AU and DirectX formats. (The Spectral Repair plug-in includes essentially the same spectrogram as the stand-alone software; the plug-in provides offline processing and is not compatible with some hosts.) The stand-alone versions of RX 2 and RX 2 Advanced also offer a 6-band equalizer, gain adjustments (including four types of fades), L/R channel-balancing controls (including phase rotation) and a real-time spectrum analyzer.

NEW TOOLS
Why upgrade from RX 1? RX 2 includes new freehand (paint-brush and lasso) and automatic (Magic Wand) tools for selecting unwanted events (clicks, dog barks, fret buzz and so on) for attenuation or removal in its spectrogram. You can adjust pre- and post-roll around selections in the spectrogram. The new Decrackler is indispensable for restoring vinyl recordings. The Hum Remover can automatically find the base frequency in need of processing, and the Denoiser and Declicker algorithms have been improved since RX 1’s release. You can chain multiple processing modules together when batch-processing files. Your edit history is automatically saved when you quit, and it’s restored after a crash.

The SRC, Time/Pitch and Spectral Repair processors work only offline in both RX 2 and RX 2 Advanced. All the other modules work in real time. I reviewed RX 2 Advanced in stand-alone mode and its plug-in versions in Digital Performer Version 7.21 (DP) using an 8-core Mac Pro running OS X 10.5.8.

CLEAN-UP TIME
RX 2 Advanced proved invaluable while re-recording (engineering the final mix for) an independent documentary video. During one outdoor scene, the Denoiser greatly tamed broadband noise from distant traffic that all but buried very quiet dialog. I could achieve more than 4 dB of noise reduction without producing any watery artifacts or dulling high frequencies. In another scene, the Declipper completely rebuilt squared-off waveforms and purged distortion on a dialog track that had been recorded too hot and had clipped hard. Amazing.

The Hum Remover includes a mode that supposedly lets you hear only the hum component of an audio file for easier adjustment of control settings, but I heard total silence instead. While moving some of the plug-in’s controls, audio is momentarily passed through unprocessed, which is a distraction when fine-tuning settings. Despite these annoyances, the Hum Remover was phenomenally effective in removing 60Hz hum and its first and second harmonics from a dialog track recorded with a poorly grounded lavalier mic. I could completely remove the hum without significantly changing the track’s timbre. And on a Foley track, Free mode let me manually dial in the corrective frequency and Q settings to eliminate a 153Hz hum of unknown origin.

THE MIRACLE WORKER
Spectral Repair can remove sounds that no other processor can touch. It uses interpolation of surrounding material to seamlessly fill in the resulting holes. I felt most comfortable using the plug-in version of Spectral Repair. As the audio files for the video didn’t include timecode metadata, exporting to the stand-alone version would have made subsequent lock-to-picture of the repaired files prone to error after importing them back into DP. That said, the interfaces for the stand-alone and plug-in versions need improvement.

The plug-in version offers real-time previewing (allowing you to hear the results of your control settings before rendering), while the stand-alone version currently doesn’t and requires a workaround. With the stand-alone version, you can undo, change your settings and process your selections again to hear the result of different settings. Alternatively, you can use the included Compare function to cache the effect of different settings for comparison purposes before committing permanently; after the caching is completed, you initiate playback to hear the cached results in turn. Neither the Undo nor Compare workarounds allow pre- and post-roll playback around the events you wish to process (the plug-in allows this), forcing you to evaluate the processing of split-second-duration events in isolation from the surrounding material you wish to preserve.

Despite its shortcomings, the stand-alone version of Spectral Repair offers a few advantages over the plug-in. Its spectrogram has a scrolling playback wiper that makes it much easier to identify the exact location of noises you want to eliminate. (iZotope hopes to include this feature in the plug-in in a future release.) The stand-alone version can also automatically find similar events to the one you’ve currently selected; this makes it much easier to, for example, remove several chair squeaks in turn without having to separately search for and manually select each one for processing.

I got my best results using the Lasso tool to select multiple objects—by drawing a border around them with my mouse while holding the Shift key—to process in the spectrogram. To my amazement, I was able to completely remove three very closely spaced and loud broadband clicks embedded in a music production’s final mix without inflicting any audible penalty whatsoever on the desired material. (The frequency bandwidth of the clicks was too wide for the Declicker to be effective.) Like removing sugar from a cake after it had already been mixed and baked, Spectral Repair did the impossible.

MAYBE I’M AMAZED
Most of the modules for RX 2 Advanced work brilliantly. The Hum Remover is a little buggy but nevertheless yields terrific results. The user interface for Spectral Repair needs improvement but won’t stop you from attenuating or removing seemingly intractable noises. The learning curve is a little steep due to a somewhat poorly written and insufficient operating manual.

Click on the Product Summary box above to view the RX 2 Advanced product page. 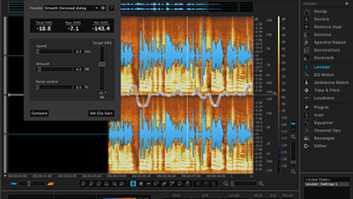