The Transient Designer from German manufacturer SPL Electronics isthe latest addition to the company’s advanced line of analogprocessors. Perhaps best known for its Vitalizer dynamically adaptiveequalizer, SPL has a history of producing equipment that accomplishescomplex and unique sound processing with intuitive controls. The newTransient Designer furthers this mandate.

The Transient Designer offers an alternative way to manipulatedynamic range. The terse manual explains that the “temporal expiry of asignal” can be modified in two primary ways: by accelerating or slowingthe transient portion of a signal, and by shortening or lengthening thesustain portion. Unlike a compressor, which “globally” alters thedynamic range of an entire audio signal according to a set of timeconstants (attack, decay, ratio and release), the Transient Designeruses a level-independent process called Differential EnvelopeTechnology(r) to maintain identical envelope processing, regardless ofinput signal level. So the idea of setting a level threshold for theonset of operation, as you would with any compressor, is meaningless.This implies that low-level signals are not altered and that theprocess is constant and instantaneous.

The Transient Designer splits an incoming signal into two paths forseparate and constant processing by Attack and Sustain sections. Theseprocesses occur in parallel, are mutually exclusive and do not interactwith one another. In the Attack section, the first of two envelopefollowers looks at the instantaneous dynamic shape of the input signaland produces a mirror image reference envelope. This process occurswithin one to two microseconds. The second envelope follower tracks thesame input signal waveform but produces a mirror image with a muchslower attack portion. If you were to superimpose the two envelopes ontop of each other graphically, you will see an amplitude “Difference”area between the two different attack portions. This amplitudedifference produces a voltage that is used to control a VCA that passesthe signal to the output. The front panel Attack knob mixes or adjuststhe amount of this difference voltage. For very short moments, positiveattack values as set by turning the Attack control to the right (+)will emphasize the front or attack portion of the signal. When you turnthe Attack knob to the (-) or negative direction, a softening orsmoothing of attack is obtained. Attack periods can be amplified orattenuated up to 15 dB.

In the Sustain section, the signal path is divided again to feed twoenvelope followers. The first reference follower faithfully traces thenatural signal. The second follower also follows, but with a muchslower-or longer-sustain characteristic built in. Again, the differencein voltage between these two envelopes is used to control the VCA.Adjusting the Sustain control on the front panel to the right (+) orpositive direction will cause an increase in envelope sustain whilenegative or (-) settings shorten decay or sustain levels. Sustainperiods can be amplified or attenuated up to 24 dB.

FRONT AND REAR PANELS SPL has made the Transient Designer verysimple to operate; only the salient Attack and Sustain parameters areadjustable. Both the Attack and Sustain controls are detented in 1dBsteps. This works out perfectly for the +/-15 dB of Attackadjustment-one click equals 1 dB. However, as the same type of pot isused for the Sustain control and for the +/- 24dB Sustain adjustmentrange, you will need to rely on the front panel labeling in dB forresetabilty. Signal present LEDs and hard-wired relay bypass switchesare provided for each channel.

The rear panel has four sets of Neutrik XLR connectors for balancedI/O for all four processors. Instructions for unbalancing inputs oroutputs are in the manual. A ground lift switch isolates circuit groundfrom chassis ground, useful for dealing with ground loops or humproblems. The unit is built in a sturdy steel and aluminum cabinet andhas solid printed circuit construction and a 15VA toroidal transformerpower supply with a choice of 115-volt/60Hz or 230-volt/50Hz mainsoperation.

IN THE STUDIO I tried the Transient Designer in as many situationsas possible and, as I expected, the unit excelled in processingpercussive sounds. The four channels are great for drum kits, or drummachines when you want to separately “redesign” the transients of asnare drum sample or an already recorded real snare drum, kick drum ortom-tom. I was able to make any drum sound or loop take on enormousamounts of attack by just turning up the Attack knob. At +6 dB on thecontrol, mushy-sounding snare drums suddenly started to “smack,” butnot in the way they often do when a compressor is applied-only theattack was raised, and not the rest of the envelope, which sometimesincludes noise or leakage. There is no change in the sound or levelexcept for the hit.

Likewise, when I turned the Attack knob counterclockwise (to thenegative), the attack started to disappear just as it would if I hadused a super-fast compressor with the fastest attack and release timespossible. At full -15dB Attack, all I heard was the decay portion ofthe snare drum sound that revealed drum snares, room ambience, leakageand noise. Increasing Sustain length by amplifying the decay portion ofthe snare drum sound worked better than using a compressor because,once the decay finished, I didn’t hear any of the extra sound and noisethat a compressor usually sucks in.

I found I could control the amount of ambience on an overambientdrum loop by turning the Sustain knob counterclockwise-I now have atool to remove reverb or room tone to achieve drier sounds. This is notthe same as tightly adjusted gating or downward expansion; this is morelike a damping control, a more musical process. The effect is verynoticeable on stereo acoustic guitars where increasing the sustainproduces more stereoscopic width or size. Conversely, reducing thesustain made the guitars much drier and “in your face.”

(One thing to be aware of when treating drums, and this is stated inthe manual, is that the process can produce big increases in peaklevels at the output. Check for clipping at the input of your DAT ormultitrack recorder and adjust the record level accordingly-I wish anoutput level control was included on each channel.)

I also tried the Transient Designer on a previously recordedpower-electric guitar track. Normally, this type of guitar sound is ahighly compressed signal with minimum dynamic range and prolongedsustain. Increasing attack gave the guitar a clearer sound withoutbeing just brighter, and the sustain control allowed me to set theamount of space the guitar occupied in my mix.

I also used the Transient Designer in a non-standard setup; Ipatched the same mono drum loop into two channels. I didn’t want a”coherent stereo image,” so I did not link the two channels. Channel 1,the left channel, was set for increased attack and decreased sustain.Channel 2, the right channel, was set for decreased attack andincreased sustain. The lowly mono drum loop now became a very animated”stereo-ized,” panoramic, wacky drum loop effect. Blog: The Downfall & Redemption of the Old RadioShack SPL Meter 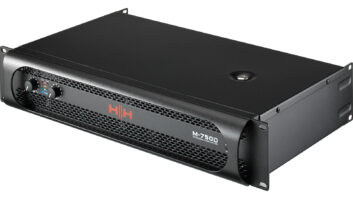