During the past two years, Studer’s D950 flagship digital production console has been an enormous success for the company, as more than 80 systems have been sold worldwide. Studer took an innovative approach to console design, and the D950 features 24-bit converters, 40-bit floating-point internal processing on a 32-bit bus and new advances in signal processing, such as Studer’s proprietary Virtual Surround Panning (VSP). VSP technology allows the modeling of a 5.1 soundfield, with all parameters under the operator’s control. Modifying the characteristics of the room, including size, ambience, absorption, pan location and distance of the sound source within or beyond the room, allows any natural – or imagined – space to be re-created.

The D950 M2 makes its U.S. debut at AES this month. Based on the existing architecture, the M2 incorporates some popular options developed for the D950 and adds a few new tricks of its own.

Like all models in the D950 family, the M2 Digital Core is fully configurable, allowing the console to be set up with as many channels and buses as needed. Console capabilities can be expanded at any time by simply installing additional DSP cards, allowing for a console size anywhere from 12 channels to well over 100.

At first glance, the most obvious difference is the M2’s color scheme. Described by Studer as a “graphic design language,” this new look uses colors to better define the various sections of the channel strip for faster, more efficient operation. With a nod toward long-term owners, Studer has added a top-surface plastic laminate over the channel sections to prevent wear of the channel markings over time. Beyond simple cosmetics, the knob sections feature new rotary encoders, each with a 21-LED ring that shows each knob’s position at a glance. Each knob also now has an alphanumeric display, indicating the function or exact value of every rotary controller in the system. Another ergonomic upgrade comes from the placement of the Solo and Mute buttons, now optimized for those hectic, hands-on, “hey-I-gotta-push-several-of-these-at-once” sessions.

The D950 M2 comes standard with the Central Assign Section (CAS), one of the more popular options on the original D950. The CAS is a complete, expanded channel strip in a straightforward, intuitive layout that’s easy to use, while bringing “stay in the sweet spot” mixing capability. Above this expanded center section are some appreciated new touches such as a color 8-channel surround meter and a new, larger 15-inch TFT color display.

Under the hood, the new console has numerous subtle, but important upgrades. The touch sensors, power distribution and the moving fader servo amps have all been enhanced; the VSP architecture has been extended for smoother, more natural early reflections, as well as the addition of late reflections (reverberation); and the M2 offers a revised AutoTouch dynamic automation system, now with complete offline editing and expanded online functionality, such as Write-to-End, Static Objects, enhanced Trim mode, Audition Punch mode and more.

Ironically, the most amazing aspect of this board has little to do with technology at all: In a radical departure from most new console intros, the M2 is shipping now. 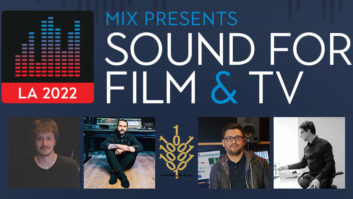