While more than 5 million fans lined the roads of Yorkshire for the opening weekend of the 2014 Tour de France, relatively few got close to the action itself. For those who could not, help was at hand in the form of large LED screens powered by LEDView image-scaling technology from Calibre UK.

The key screens were supplied by two companies – Lightmedia and Big TV – both of which specified Calibre’s LEDView530 as their large-display image scaler of choice for the Grand Depart.

Lightmedia supplied 19 LED screens along the route of the two opening stages from Leeds to Harrogate and from York to Sheffield, with many of them acting as the visual centrepiece for official Tour de France fan parks.

Eddie Elliot-Smith, Managing Director at Lightmedia, comments: “We use the Calibre LEDView530s as a key part of our rental-and-staging operation, to scale live broadcast content from TV cameras around the course for display on each and every one of the LED screens we supplied.

“We use Calibre because, quite simply, they are the most reliable solution in the world. Not only have we used them for this year’s Grand Depart, we also relied on them for other high-profile international events such as the Queen’s Diamond Jubilee, the wedding of Charles and Camilla, the launch of Xbox ONE and, indeed, Calibre’s previous generation of product at the Tour de France the last time it came to Britain in 2007.”

LED screens from Big TV for Skipton, York and Leeds

Big TV head technician Simon Woodcock says: “We went down to Yorkshire fresh from Edinburgh Festival and provided LED screens to various areas on the opening weekend, including Skipton, York and Leeds. The new ‘SkyFly’ mobile LED screen wowed crowds and we also provided screens for a number of private events and parties in Yorkshire as well.

“Calibre quality is central to our LED fleet for managing live feeds. The LEDView530 can take anything you throw at it!”

A high-quality LED-optimised scaler-switcher and universal interface for LED screens, the LEDView530 provides best-in-class professional image processing in a compact, affordable 1U format. It features a jog-wheel and LCD display on its for front panel for fast and easy set-up in the field, and boasts a plethora of useful features including colour adjustment of all source types, powerful picture resizing with simple pixel-accurate edge drag-and-drop, and superior scaling, de-interlacing and noise reduction to reduce image flicker and artefacts.

For mixed rental fleet use the scaler also has a Projection mode in which it supports warp mapping and edge blending, as well as geometry correction and general projection scaling functionality as well as a Scaler-Switcher mode for general purpose scaling and scan conversion making it a truly universal device. The LEDView530 also boasts genlock and I/O lock, making it suitable for on-stage or in-camera use at live events.

Pauline Brooksbank, Managing Director, Calibre UK, comments: “As a Yorkshire company ourselves, we were delighted and extremely proud to have supplied LEDView530 units to power so many LED screens along the route of our county’s “Grand Depart”. This unforgettable weekend was not just a celebration of cycling but a unique opportunity for local people to experience a sporting event they had never come so close to before.

“The crowds who lined the route were 20-deep in places but, thanks to Calibre’s Yorkshire-manufactured technology’s ability to take live broadcast feeds and process them for large-screen display simply, reliably and with absolutely no sacrifice in quality, everybody felt that they were part of the action.”

Multi-award winning British company, Calibre has over the past 26 years achieved world recognition providing image scaling and processing technologies for use in broadcast/television, digital cinema, large venue projection, LED videowalls and surgical medical applications.  Calibre manufactures products under its own brand-names as well as providing products and technology to several market leaders in the Pro-AV market worldwide. Calibre is a market leader in innovation, utilizing its own, UK & Germany-based in-house hardware and software design teams for all its product developments and its own UK manufacturing. 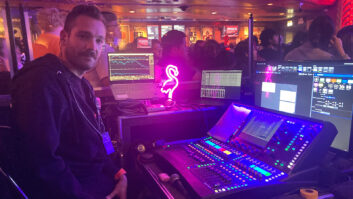