Pictured (foreground) in concert with TELEFUNKEN M80s are Green Day’s Billie Joe Armstrong and bassist Mike Dirnt. Photo by Chris Dugan.
Green Day’s rigorous touring calls on the rugged new TELEFUNKEN Elektroakustic M80 dynamic microphone for all vocals and various instruments. The dynamic stage and studio mics are new models from the company renowned for its classic re-creations of the most valued vintage microphones in the music industry.

At Ocean Way Recording for the smash hit album “21st Century Breakdown,” all of Billie Joe Armstrong’s vocals were recorded with his new TELEFUNKEN U-47, while all of Mike Dirnt’s vocals used the new company’s new ELA M 251. Both large diaphragm tube microphones are manufactured by the industry leader in the meticulous reproduction of masterpiece microphones of the past.

“The M80s are awesome,” comments Green Day engineer Chris Dugan, who works with the band on the road and in the studio. “We put the M80 on a snare drum and that is where I fell in love with it. It was exactly what we wanted on Tre’s snare. When it came time to tour, I suggested it to Kevin Lemoine, our FOH (Front of House) mixer, and when we tried it on vocals is when I saw the light. We’ve been mixing some live shows from Japan before we got the M80s and compared with later shows with the TELEFUNKENs, it is like night and day.”

“Without any EQ added,” Dugan continued, “the M80 has a crisp top end, there’s more rejection of unwanted stage sounds, and it has a nice tight pattern, which is very important for us. It almost sounds like it has been EQ’d, with a ton of clarity, a lot of top end without being sizzly, and a nice warm body to it. Before the M80s, we had a lot of guitar and cymbal bleed in Billie’s mic, but not any more.”

For the recording of “21st Century Breakdown” at Ocean Way Recording in Hollywood, producer Butch Vig and Dugan had an extensive microphone shoot-out to find the right mic for Armstrong’s vocals. “We had Butch’s vintage 250, and bunch more from Ocean Way’s world famous collection, but when we put up the new TELEFUNKEN U-47, we all leaned toward picking that one. When Billie heard his playback he fell in love with that mic, and we didn’t even tell him what kind it was. All of his vocals for the album used that mic.”

“We had another shootout for Mike Dirnt’s vocals and the new TELEFUNKEN 251 came out on top. I was really excited for TELEFUNKEN.”

Green Day is currently touring the U.S. and will begin the European leg of the tour in Lisbon, Portugal, on September 28. The band will perform live at the MTV Video Music Awards on September 13.

TELEFUNKEN Elektroakustik has been nominated in both microphone categories of this year’s Technical Excellence and Creativity (TEC) Awards, taking place on October 10 in NYC at the annual Audio Engineering Society Convention:
Studio Mics: U-48 and Sound Reinforcement Mics: M80 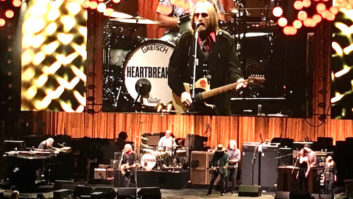