Amsterdam, The Netherlands—April 2020… Internationaal Theater Amsterdam (ITA) is both a theater venue and home to a large-scale, international traveling company presenting established and new theater and dance works. Led by director Ivo van Hove, ITA has increasingly worked with immersive sound environments in recent years. It can be demanding in its home theater, and can present special challenges when the company travels. “One of our venues is about 600 seats, a modern blackbox theater,” remarks ITA sound department member and sound system designer Erwin Sterk. “But we also tour to huge auditoriums with 2,000 seats, and it was quite hard to have our streams or files for immersive audio working in different speaker setups.”

Sterk and his team could partially meet the challenges with various combinations of software but none were entirely satisfactory until they started using FLUX:: Immersive’s Spat Revolution software. Initially, they experimented with an earlier Max patch version of Spat from IRCAM, recalls Sterk, “but Spat from IRCAM was still somewhat experimental, and not completely an end user product for live shows. We used it for tests and to create the reverb, but I’d always end up bouncing the results.”

Two years ago, Sterk found out that FLUX:: Immersive had built a finished product that works with OSC. The timing was perfect, as ITA was preparing a new show called A Little Life, with a string quartet and a composer whose work Sterk felt would benefit from Spat. The composer trusted Sterk’s judgement, and the results were excellent. “We ended up using Spat for a lot of the soundscapes that surround the audience, and I also used it for amplifying the string quartet,” Sterk recalls. “The show was quite intense, and at times we used Spat to spatialize and move the separate instruments around the audience. And when the quartet switched from playing harmoniously and softly to playing something very staccato and abstract, suddenly they’re dry and spatialized. People were saying, “Wow, it sounds so natural, and you don’t hear the amplification. How do you achieve that?” The creative team and composer were amazed by how quickly we could achieve this without re-programming in the mixing desk.” 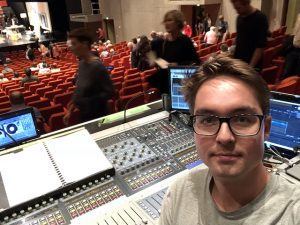 This kind of programming with a mixing console takes a lot of time and is more complicated, Sterk relates, “and in stressful situations it’s tricky because you can mess up with your scenes or with your routing. With Spat’s virtual spaces, it’s more realistic and consistent. You can mix the directions where the source comes from, and Spat calculates all the reflections and the reverb.”

In another play, an actor is playing different roles, such as the maitre d’hote / hotel clerk, or a vendor who is selling strawberries on the beach. “When he’s shouting from off stage, like ‘Buone fragole!’ or making an announcement in the hotel, we use Spat to place it so it sounds like he’s located where we want him,” describes Sterk. “The results moving from the rehearsal room to the venue are amazing. We even use Spat as a reverb engine for some objects in the rooms that don’t move, and we use it as a surround burst.”

At times, Sterk employs Spat as one would a game engine. “In a video game, you have music and effects around you, and they’re all oriented relative to your changing position,” he observes. “Using sound as objects opens a whole new set of creative tools for a variety of applications” as sounds are moving around you or an audience starts moving.

One of the biggest advantages of using Spat for a touring company like ITA is the ability to re-create a design in different venues. “If you move to a new venue, you have to adapt the speaker plan,” details Sterk. “In Spat it’s easy to make changes to the speaker positions in the software to re-create the sound of the room. But there is more. If, for example, your sound effect is a bird flying around, and you don’t like the trajectory in the new venue, you don’t have to re-create your whole show file. With three mouse clicks, you can draw a new line, listen to it, and have the new version for today. With Spat, if you know the OSC commands, you can start from scratch and work with it. We finally have a tool that we can easily bring into a production without needing a big investment.” 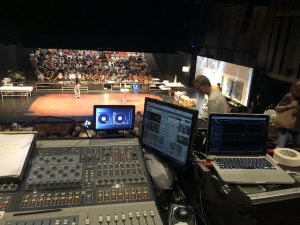 Sterk especially likes to use his imagination with Spat. “It’s really cool to use Spat live, and it’s super-fast,” he offers. “When the director wants something special, you can make it directly with your mouse or with a touch screen. When he’s happy, you can re-record the OSC files with a sequencer, to reproduce what you did. When using Spat, I don’t care about the numbers anymore; I completely forget about the values of settings. I get the speakers and the objects right, and I’m just creating a sound I am looking for. And Spat has parameters you don’t have in other tools that enable you to create cool sounds. We used Spat to create a really nice effect with a fade from a small to a big room and from big room to small, changing the room absorption. There are a lot of fun things you can do.”

Although one can use Spat for wild immersive effects for live concerts or theatrical plays, Sterk feels that isn’t always the best use. “I think it works more to place the whole audience in a room with re-created room acoustics to extend your soundscapes,” he opines. “You get a better and equal mix because you can achieve a localization that’s spread over multiple speakers. Spatialisation adds an extra dimension to the creative pallet. Whether it’s a trumpet flying around or realistic acoustics in a particular scene, it has to be an extension of the story you want to tell. We can achieve that with Spat, and that’s why it’s the best on the market.”