NEWPORT, Washington — Sound engineer Bradley Johnson of Newport, WA-based KRF Audio, spent a lot of time listening to Megadeth in his early years mixing, so he was well prepared to man the controls for the legendary metal band’s live show, currently on a world tour hitting more than 25 countries in four continents and wrapping up this August in England.

DiGiCo has long been Johnson’s console supplier of choice, and, in fact, he owns his own gear. “When I go on the road to mix, my board comes with me,” says Johnson, who’s serving as FOH engineer on the current Megadeth tour. “To me, a mixing console and its related outboard gear are an extension of the engineer. Being comfortable with the console is paramount to the quality of the end product and allows engineers to be more creative with their mix.”

Working with Megadeth leader Dave Mustaine is always a professional challenge, notes Johnson, because he’s “very meticulous with the sound on stage. He soundchecks nearly every day and has a specific routine that he faithfully adheres to. It starts with him listening to each instrument individually without in-ear monitors. When happy with levels and tones, he will put in his ear monitors and play with the band, starting first with drums and then adding each instrument one after the other. This is all done with the house PA off. When everyone is happy, I will bring up the mix in the house to a point where it does not interfere with the band’s monitor mix. This can be challenging depending on how ‘live’ the room is or isn’t.”

For the current world tour, DiGiCo’s SD8-24 is being used for both FOH and stage monitors. Like Johnson, DiGiCo is also the number one choice of Megadeth’s monitor engineer, Dave Rupsch.

“It’s being used on stage for the same reasons as FOH; overall sound quality and performance versus footprint,” says Johnson, explaining that international travel played a role in the choice.

“Because truck space and shipping weights have become such a large consideration, we share a DiGiCo stage rack between FOH and monitors, thus eliminating a second rack and an analog split. This makes the entire sound system extremely compact and gives up nothing in the way of audio quality,” he continues. “The layout of the DiGiCo consoles makes sense to me. I am not sure why other manufacturers miss this point so obviously. If there is one thing I can’t stand, it’s an IQ test every time I walk up to a board. When it comes to reliability, audio quality, innovation and support, DiGiCo has always delivered.”

Despite the metal genre’s reputation for pushing eardrums to maximum tolerance, Johnson notes the stage volume is fairly controlled, as the result of Megadeth band members being on in-ear monitors. Side fills are used, but they are primarily to add “feel” or “impact” to the stage. “Stage volume is a pleasant 102 to 104 dBA, which is not really the norm for this genre, but is very helpful from an engineering perspective,” admits Johnson.

“My mix in the house varies quite a bit depending on room size or if it is an outdoor venue. I have never had an issue with headroom on any DiGiCo console.” It was recently put to the test in Las Vegas, where metal legends Motörhead opened for Megadeth. “That was a good gig, plenty of PA in that room, and a show with Motörhead. They don’t make ’em like Lemmy anymore,” Johnson comments.

Megadeth uses two audio systems for tours. One is based in the USA and was used on the three Megadeth dates in April prior to the first international gig in Ecuador on the 22nd, which was one of seven South American shows.

The “fly” rig used for non-US dates consists of a DiGiCo SD10-24 at FOH and an SD8 monitor console. “The beauty of the SD10 is that while a Waves SoundGrid server is not needed to produce excellent results, it simply adds more tools to an already substantial toolbox,” says Johnson, who’s planning to add a Waves server to the SD10 that will fit snugly in the console’s road case.

There’s an assortment of analog and digital outboard gear including: TC Electronic System 6000, Waves MaxxBCL, several Empirical Labs products, Eventide Eclipse, and a 56×32 stage rack with a DiGiCo D-TuBe preamp. “There must always be at least one tube somewhere in my audio rig,” laughs Johnson, who tends to lean toward “what works for me, as opposed to the latest greatest whiz-bang box of the day.”

Johnson believes plug-ins should be used as tools or enhancements, as opposed to being necessary for quality output. “I can’t say how many times I have heard engineers say something along the lines of ‘I need this or that on every single input’. To me, this says quite a bit about their console’s sound quality or lack thereof. With DiGiCo, however, the sound quality is never in question. It’s always fantastic.” 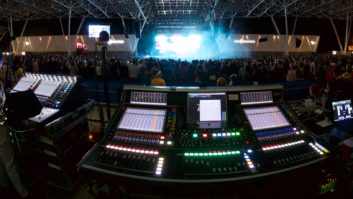