SOUTH BARRINGTON, IL– Sound Devices‘ 744T digital recorder recently helped Willow Creek Community Church illustrate its AIDS relief and prevention efforts in Africa. As part of the church‘s service during the weekend of World AIDS day (December 1-2, 2007), the church presented a 25-minute video update of the resources and support it has supplied to World Relief for its work in the African country of Malawi.

The video was shot documentary-style with interviews of local church leaders and members who are a part of the relief efforts. With the interview set-ups varying and a basic audio setup of a stereo shotgun mic and two wireless lavalier systems at the crew‘s disposal, Sound Devices‘ 744T became a versatile and effective option for recording audio rather than capturing audio on the cameras themselves.

“The reason we wanted to use the 744T was because we were shooting with two cameras and we needed the flexibility to change our configuration in a moment‘s notice,” explains Jeff Beaumont, sound mixer for the video. “Gene Appel, our teaching pastor and on-camera person for the project, would go into a situation wired up for an interview. We‘d typically put a lavalier on the person to be interviewed, but if it turned out there were five or six people that needed to be interviewed at once, we‘d use the shotgun mic. With the 744T we were ready to switch back and forth between any setup required.”

The recorder was used in conjunction with a Sound Devices 442 field production mixer, with the direct outputs set into the four tracks of the 744T, so anything picked up on the three microphones would be recorded to the 744T. By using the 744T, Beaumont was able to provide a high-quality mix with the added security of having all four tracks recorded separately so the tracks could be changed in post as needed. Along with its adaptability, the 744T recorder was able to capture a unique but unexpected aspect of Malawi‘s culture.

“Whenever you go to meet a group of people from Malawi, especially in a church setting, they usually sing a song to greet you,” Beaumont continues. “I used a lot of these songs as the basis for our soundtrack. I knew that what we were picking up was being recorded exactly the way we heard it — the 744T preserved every nuance of sound that we picked up on the microphones.”

In addition to the quality sound recordings, Sound Devices‘ 744T was also able to hold up to the rugged conditions of the various shooting locations in Malawia.

“We spent a lot of our time riding in the back of Land Rovers on bumpy roads and would have to hop out and start shooting almost immediately,” Beaumont continues. “A lot of times when you work with equipment that isn‘t sturdy, you have to disassemble everything and pack it into cases to prevent it from breaking. The 744T allowed us to leave everything in the production case. That way we were ready to go at a moment‘s notice and could just start working.”

The second half of the video chronicling the organization‘s efforts in Zambia will be part of an upcoming service and posted on the church‘s website. 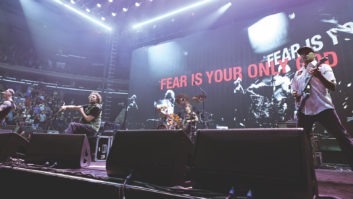