Without question, Cubase is one of the most comprehensive DAWs on the market.. Whether you’re producing music, scoring to picture or doing post-production, chances are it has the features you need.

Steinberg, to its credit, never rests on its laurels or lets Cubase become stale. Each successive major update brings a host of new capabilities that quickly become integral to user workflows.

Although it doesn’t include any new instruments, Cubase 11 debuts some excellent plug-ins, useful updates of existing ones, powerful new audio export and MIDI-editing features, spectral editing and much more.

Cubase comes in several tiered versions, the three main ones being Pro (reviewed here), Artist and Elements. This review will focus on what’s new, with side references to the version(s) that include the new features.

MIDI AND SCALING UP

Those who work regularly with MIDI will appreciate the improvements in Cubase 11’s MIDI Key Editor. One of the most dramatic is the Scale Assistant (Pro, Artist, Elements), which lets you conform MIDI notes to a selected scale or the song’s Chord Track, whether you’re recording or editing MIDI. You can choose from a huge list of scales and modes, from Western motifs to Arabian, Balinese, Chinese, Hungarian, Japanese or Persian.

If you’re editing a MIDI part and turn on the Scale Assistant, it changes any notes that are not in the selected scale to red. If you turn on the Snap Pitch Editing mode, any notes you move will be constrained to the scale. You can also select a note or notes and use the Quantize Pitches button to constrain them to the nearest note of the chosen scale.

Each track can have only one scale. If the song modulates or has chords that are out of the key, it’s best to set Scale Assistant to follow the Chord Track, where it will change scales as appropriate. In that mode, you can tell it to make decisions based on chords, scales, or chords and scales.

The most dramatic feature in Scale Assistant is Snap Live Input mode. Turn that on, and you can play any notes or chords on the keyboard, and Cubase will conform them to match the Chord Track. As a guitar player who can only play simple chords on a keyboard, I was psyched to try it out.

I set it to a scale and recorded a synth solo. As I played, it constrained the notes to the chosen scale, freeing me up to be expressive.

I used it in Chord Track mode to record a comping electric piano part on a song with a lot of chord changes, and it worked perfectly. I was playing four-note chords with my right hand and a bass note with my left. The result was a part that I could never have played correctly if I had to worry about the fingerings for each chord.

Another big improvement to the Key Editor (Pro, Artist, Elements) is the ability to view Global Tracks (Tempo, Marker, Video, etc.). In past versions, you had to switch back to the Project window to see them. If you work a lot with MIDI, particularly to picture, Key Editor Global Tracks should simplify your workflow.

Cubase 11 handles CC data even better than before. You can now copy and paste it between tracks. When editing CC data, you now can create ramps and curves just like with automation. For editing Pitch Bend data, Steinberg added a semitone grid. If you have bends that end a little out of tune, this feature can help you easily fix them. You can edit and draw pitch bend data and know that each bend will land on a semitone. Steinberg added some significant improvements to its existing Sampler Track feature, which it now refers to as Sampler Track 2 (Pro, Artist, Elements). For those unfamiliar, Sampler Track is a built-in and powerful sampler function that you can use with imported audio or audio or MIDI (which it converts to audio) from your Project.

The biggest addition is Slice mode, which offers another choice to the existing Normal and AudioWarp modes. When you choose Slice, Cubase automatically cuts up the sample at its transients. A Threshold knob lets you select the minimum level of transient detection to be applied. Cubase then automatically maps each Slice to a separate MIDI note. Slice mode can be used in so many ways. One off the top of my head? Import a drum track or loop, slice each beat into individual MIDI notes, and then play the kit from your MIDI keyboard.

Other Sampler Track improvements include new audio-quality choices in Normal mode. The lowest, Vintage, is designed to mimic the sound quality of an early hardware sampler. Steinberg has also added two LFOs and a mono legato glide function to Sampler Track 2.

SuperVision (Pro, Artist) might just be my favorite new plug-in in Cubase 11. It’s a powerful and completely customizable multimeter and audio analyzer. You can choose from 18 different meters, including Loudness, Phase Correlation, Panorama, Spectrogram, Spectrum Curve and Spectrum Bar, among others. If you have Cubase configured for Surround or Ambisonics, there’s a dedicated meter for each of those.

But what makes SuperVision live up to its name is that you can split it into multiple horizontal and vertical zones and put a meter of your choice in each. You can save custom meter combinations as presets.

What’s more, the SuperVision GUI is resizable. So even if you use its maximum of five vertical and five horizontal zones, you can enlarge the main window so that the meters aren’t too small.

Another new plug-in, Squasher (Pro, Artist, Elements), is a multi-band compressor that offers up to three user-adjustable bands. It’s unique in that you can dial in both downward and upward compression, or both in each band, as well as saturation and gating.

A display on the top of the GUI allows you to edit the crossovers and change the per-band gain graphically. You also get band-specific sidechain inputs that can be set for internal or external sources, and to control the compressor or gate sections.

Squasher seems particularly useful on high-energy sounds (Steinberg recommends it for EDM), particularly where you want the compression to be noticeable rather than transparent. It’s great for fattening up drum tracks, for example, while upward compression helps for bringing out lower-level details such as hi-hat or other cymbals.

Imager (Pro, Artist) is another multi-band plug-in. It offers up to four image-adjustment bands. Each band offers Width, Pan and Output knobs. The top section, like Squasher, provides graphic control so you can adjust crossover points and raise or lower the level of each band, zeroing in on specific Elements in a track or bus that you want to make wider or narrower in the stereo image.

Frequency 2 (Pro) is the new version of Cubase’s excellent multi-band EQ plug-in. As in previous versions, you get eight bands of fully parametric EQ with a selection of filter types and the option to turn on linear phase processing for each band.

The big news is the addition of Dynamic EQ, which is switchable per-band. When you activate it, you initially don’t see any controls. You have to toggle the global View to Single Band. Then you see dynamic EQ controls that include knobs for Start (starting level), Attack, Release, Ratio and a slider for Threshold. A graphic version of the controls, including a real-time analyzer, is located at the top of the GUI.

Included with Cubase 11 is SpectraLayers One (Pro, Artist, Elements), a limited-but-still-powerful version of Steinberg’s spectral audio-editing application. It’s a separate program that you can open within Cubase11 using the Extensions menu. It shows up in the Lower Zone of the Project window, offering a suite of tools for selecting and editing audio inside a spectrogram display.

The most popular aspect of SpectraLayers One in Cubase will likely be the Unmix Vocals feature. If you open SpectraLayers on a mix with vocals, you can apply its powerful separation algorithm to split the vocals and instruments into two separate Layers that you can mute, solo, and edit separately. You can export the separated Layers into your Project, allowing you to do a remix from the vocal track or create an instrumental version.

It’s hard to think of an upgraded export utility being exciting. Still, Steinberg changed the  Export Audio Mixdown Dialog in Cubase 11 (Pro), making it a lot more powerful, particularly for those who regularly deliver stems. The new Job Queue feature allows you to set up multiple export Jobs that each have their own selection of tracks and format settings.

It works like this: Click the checkboxes for the tracks, channels and buses that you want to export, then press the Add to Queue button, and Cubase creates a “Job” in a new field at the bottom of the dialog called the Export Queue. Before rendering, you can select bit depth, sampling rate and file format for the exported tracks. You can also save settings as recallable presets.

Once you’ve configured a Job, pressing Start Queue Export initiates the rendering process, and green progress bars appear next to each element in the active Job Queue.

The most consequential aspect of the redesigned export feature is that you can create as many Jobs as you like and then render them all at once. Previously you had to do it one at a time. This should be a huge time-saver.

AND THAT’S NOT ALL

My only real gripe with Cubase is its documentation. The operation manual, though well-organized and indexed, lacks sufficient detail throughout, particularly for some of the more complex functions.

That aside, Cubase 11 is a significant upgrade that makes an already powerful and comprehensive DAW even more so. No matter which version you use, I highly recommend the upgrade. Steinberg has aced it again. 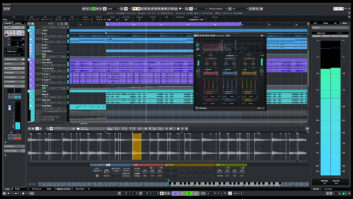