The pulse of the entertainment industry continues to strengthen, as demonstrated this past Saturday by the reopening of Springsteen on Broadway, the first full-length show to play on the Great White Way since the pandemic forced it to go dark in March 2020.

Springsteen performed at the St. James Theatre to a capacity crowd of 1,700-plus vaccinated fans, and at one point in the evening stated, “I am here tonight to provide proof of life…” Encouraging words from The Boss, who has scheduled a steady stream of performances at the St. James through the beginning of September.

Springsteen’s show differs from most Broadway performances in that the “production” is essentially Springsteen and his guitars (augmented by occasional use of a piano or harmonica)—a stark contrast to the Broadway productions that employ dozens of actors, actresses, dancers, musicians and techs, and utilize elaborate set design, costumes and special effects.

Shows like The Lion King, Hamilton and Chicago are slated for return to Broadway on September 14, with others close to follow, and no doubt theatergoers are as excited as the production staffs. In the meantime, Springsteen on Broadway is breathing some much-needed optimism into the theater community.

Springsteen On Broadway was already running before the pandemic hit, but it’s an interesting case for the post-pandemic recovery period. It means minimal travel for the artist, though I can’t help but wonder if The Boss goes home to New Jersey after each show or stays at a hotel in Manhattan.

The lack of a band and the requisite tech crew reduces the number of people backstage, thus diminishing chance of exposure to someone who might be carrying a variant (vaccinations notwithstanding). And it’s much different than a tour…

It’s a more cost-efficient venture: There are no band or crew salaries to pay, no need for buses and/or planes, minimal backline, no production gear being hauled around the country by a convoy of trucks, decreased venue labor costs otherwise incurred for load-in and load-out, and The Boss isn’t paying for 50 hotel rooms per night. I’d make a guess that his profit margin on this gig far outweighs that of a traditional tour toting all of the baggage.

On the outside looking in are the people who might have worked on a “normal” Springsteen tour who are not working on this show: the musicians and techs, bus and truck drivers, set designers, carpenters, wardrobe, catering people… the trickle-down effects are scary. It’d be easy to imagine that an artist of Springsteen’s stature could get comfortable doing a residency gig like this and shun touring altogether—an approach that has been working for Billy Joel.

The idea of “I’ll stay home and you come to see me” works more effectively for top-level superstars who become a destination for a loyal, long-term fan base. The residencies we’ve seen in Las Vegas (Elton John, Celine Dion, Bruno Mars, Lady Gaga, etc.) clearly demonstrate that people are willing to spend money and travel to see their favorite artists.

However, most artists need touring and can’t simply stay home waiting for fans to come to their house—and that means work will return for the touring industry, albeit slowly. But it’s coming… 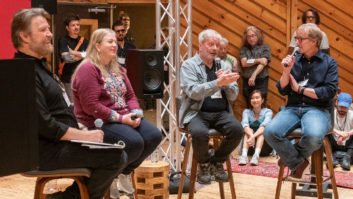 Getting Live Sound On The Road Again