It’s been almost five years since Matchbox Twenty released a studio album of new material, and in the interim, frontman Rob Thomas has built a successful solo career and duetted with Carlos Santana. But the bandmembers are now reunited, touring behind a greatest-hits collection produced by Steve Lillywhite: Exile on Mainstream. Mix caught up with the Exile in America tour at the HP Pavilion in San Jose, Calif.

As with previous Matchbox Twenty outings, PRG is supplying the P.A. According to front-of-house engineer Jim Ebdon (right, with crew chief/system tech Chuck Wells), they are hanging 15 L-Acoustics V-DOSC and three dV-DOSC per side for the main hang, as well as six dV-Subs. Eight SB 2×18 subs are on the ground, set up for omni bass. The side hang comprises eight KUDOS per side, and four dV-DOSCs are situated along the front edge of the stage for in-fill.

“I’m using the DiGiCo D5 Live EX 56 [inputs] for the tour,” Ebdon adds. “I’m mainly using the onboard gates and comps, but have a [Drawmer] MX50 de-esser and a Focusrite ISA 430 for Rob [Thomas’] vocal, and an SSL comp for the drum mix.”

Chuck Wells relies on SIA Smaart for room tuning: “The only way I have found to tune is my voice through an [Shure] SM58,” Wells says.

“This band has some great guitar tones and I have found the mic choice is very important and can take the mix to a new level,” Ebdon says. “I experimented in rehearsals and found the Royer 121s the best guitar mics for this tour.”

Thomas sings through a Shure UHFR with a KSM9 capsule. “I loved it the first time I heard it,” Sharp enthuses. “The rest of the guys are using SM58s. We have Sennheiser E300 G2 Series packs with transmitters for in-ear monitors. The band and I are all on Ultimate Ears UE7c ear molds. I am using the Professional Wireless Systems’ GSX-8 antennae combiner; they have provided a stable RF platform that is unrivaled.”

Brian Yale’s bass tech, Lonnie Totman (at right, to the left of Valjean Leiker, guitar tech for Paul Doucette and Rob Thomas), explains that Yale’s rig was built by himself and Rack Systems’ Dave Friedman. “It comprises two Samson UR6DC dual-wireless units and a DA-5 distribution amp,” Totman says. “From there, the signal goes to a Whirlwind Selector to choose wireless outputs. Next, it heads to a custom-made rack switcher. The rig is non-MIDI.”

In the rack sits a Tech21 SansAmp, an Ibanez TS-9 and an Expandora distortion pedal. The other key unit, according to Totman, is a Sadowsky preamp box used for level matching. “The interesting part of Brian’s rig is we don’t use an amp and mics,” he adds. “We have a couple Ashdown Engineering EVO 500 heads and one of their 4×10 cabs, but it’s there in case of a special circumstance. It’s a great-sounding amp and cab, but by eliminating the live bass amp onstage, we are able to keep the overall mix less washy.”

According to Leiker, Doucette plays through a Vox AC30 (miked with a Royer model), Bad Cat 2-Channel (Audio-Technica AT4050) and a Fender 3-Channel Super Sonic Head (Shure SM57). Doucett rocks out on a number of guitars, including Gibson 335s, Epiphone Sheratons, and Fender Jaguar and Mustang, etc.; Thomas relies on a Gibson J200.

According to guitar and keyboard tech Danny “Borga” O’Neil, both guitarist/keyboardist Paul Doucette and Thomas use a Baldwin Piano Shell with a Roland RD-700SX. Beck plays with numerous guitars, including models from Gibson, Rickenbacker, Fender and Gretsch. Guitar amps include a Vox AC30 with a Royer R-122 mic and a Fender Twin Reverb Deluxe (lap steel) with a Shure SM57.

WATCH: Must Play
Photo Gallery From the Tour 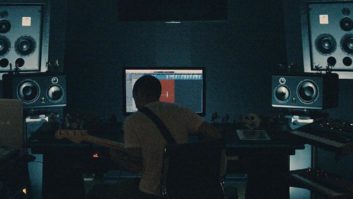