In the music biz, adjectives like “legend” and “master” are used so much that they become jaded and cliché, but in the case of Bill Porter, they certainly apply. Not only was he a brilliant engineer with the innate ability to engineer hit after hit using simple mono, stereo and primitive 3-track recorders (an almost lost art in these days of unlimited virtual tracking), but Porter was also a warm and wonderful human being who spent years of his life giving back to the community as an educator.

A Nashville kid (East Nashville High’s class of 1949), Porter grew up around music, and loved music and was self-taught in electronics. After serving in the Army reserves, he hoped to be a cameraman at Nashville’s new CBS Affiliate WLAC, but was assigned to do audio, because no one else at the TV station wanted the job. Five years later, Chet Atkins recognized something special in Porter, hired him as a staff engineer at RCA Nashville.

After two short months, he cut his first charting song—Don Gibson’s “Lonesome Old House.” The hits kept coming. In late 1959, Porter had his first session with Roy Orbison, doing “Paper Boy” and “Uptown,” followed by chart toppers like “Only the Lonely” and (years later with “Oh, Pretty Woman”), Tommy Roe’s “Sheila,” along with many hits for The Everly Brothers (among these are “Cathy’s Clown”), Al Hirt’s “Java” and a long association with Elvis Presley on RCA, resulting in classics such as “Stuck on You,” “It’s Now or Never,” “Surrender,” “Are You Lonesome Tonight?” and “Good Luck Charm.” In all, Porter engineered some 7,000 sessions that yielded nearly 600 charting records, including 11 Number One songs and 49 Top-10 hits.

Chet Atkins and Bill Porter (right) work on a session at RCA Studio B in Nashville, June 1961.

Porter’s work as chief engineer at RCA Record’s famed Studio B led him to be widely acknowledged as one of the main architects of defining the “Nashville Sound” in the 1960s. But his spirit of innovation didn’t stop there. In 1966, he moved to Las Vegas to manage Bill Putnam’s United Recording of Nevada, a studio later Porter later acquired. During this time, he worked with many artists, including Barbra Streisand, Diana Ross and Sammy Davis, Jr.

In 1969, Elvis’ producer Felton Jarvis came to Porter with an 8-track master of “Suspicious Minds,” hoping to add some horn parts. As all the tracks were full, Porter suggested having the horns perform live in the studio while he mixed them in with the tape tracks. Sometimes, clever solutions come out of necessity.

From this came a request that Porter help with Elvis’ live sound, beginning a new life path for Porter that he stayed with until the star’s death in 1977. In his post-Elvis career, Porter was focused on education, continuing the work he started in 1975, where he established the first 4-year audio recording degree program in the United States at the University of Miami. Even today, Porter’s recording technique program is a model used by many other schools. He continued working with audio engineering students, lecturing at AES events and colleges worldwide, and spent years teaching at the University of Colorado and Webster University in St. Louis.

Inducted into the TEC Awards Hall of Fame in 1993, Porter also won the William T. Kemper Award for excellence in teaching in 2003 and was bestowed with a lifetime achievement award from the Student Chapter of the AES at Webster University.

Bill Porter passed away peacefully in Ogden, Utah, on July 7, 2010, with his wife Carole by his side. He is survived by a brother, sister and his children Nancy and Gene.

Memorial donations should be sent to the University of Miami’s Music Department in Bill Porter’s name. 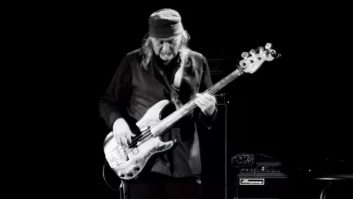