APR Audio has won praise for turning the Jazz World stage into one of the best-sounding and most consistent venues at the UK’s enormous Glastonbury Festival, pulling Shuttlesound’s Jason Kelly into their team to help maximize the performance of their Electro-Voice line array systems.

Following the success of their work here in 2005, APR Audio was once again asked to provide an E-V X-Line P.A. and X-Array monitor systems for the Jazz World stage, which attracted crowds of up to 30,000 to hear artists such as Amy Winehouse, Corinne Bailey Rae, Damian Marley, Rodrigo Y Gabriela, John Fogerty of Creedence Clearwater Revival, Guillemots, Mr Hudson & The Library, Fat Freddie’s Drop and Seth Lakeman.

“Jazz World is generally regarded as the musicians’ stage,” says APR Audio’s crew chief Matt Gunter. “This is where the real musical talent plays, and I suppose we do go the extra mile for them. This stage is respected by the performers, engineers and audience because of the consistency of the sound. Jazz World uses the same P.A. every year, and we bring a good experienced crew. We saw the noise police only once—we ran at 96 dB all weekend and had no problems at all.”

For the main P.A., Shuttlesound’s Kelly helped design a system using E-V’s X-Line Xvls and Xvlt cabinets flown from 16m towers, with 28 Xsubs deployed in two-wide, six-high stacks, plus four for center-fill. E-V’s new XLE181 cabinets provided front-fill, and the system was run from E-V’s Precision Series P3000RL remote-control DSP amplifiers. “We used E-V’s dedicated IRIS-Net management software to control the system, but kept it very plain and simple, mainly to keep the levels in touch.” At front of house, the main console was a Midas Heritage 3000, with a Venice 160 used as a main control to drive the system. Klark Teknik DN370 provided grab EQ on the H3000; a K-T DN9344 Helix digital slave equalizer was used for the main system.

Onstage, APR Audio provided E-V Xw15A wedges and X-Array cabinets for side and drum fills. All speakers were run with Klark-Teknik DN9848 digital system controllers and monitored via K-T’s Elgar control software; monitor engineer Laurie Brace tweaked his inputs on a PC placed next to the Heritage console. 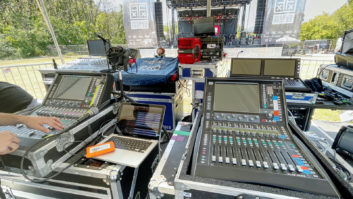