I’ve worked with Mark of the Unicorn devices for quite a whilenow. Back in 1999, I reviewed MOTU’s original and wildly successful2408 audio interface for Mix’s sister magazine,Electronic Musician. Working extensively with MOTU’ssubsequent audio interfaces, I’ve recorded and mixed everythingfrom commercial CD tracks to live theater music to soundtracks forfilm and TV, and I’ve found that the quality of MOTU’s interfaceshave always served me and my associates well.

However, I’ve been in some critical recording situations whereeither an interface with multiple balanced XLRs were required or wewanted to record at sampling rates higher than 48 kHz. Untilrecently, other hardware solutions were the only choice. MOTU’s1296 now provides these features, plus a lot more.

The 1296 provides 12 analog channels of inputs and outputs viaXLR connectors operating at +4 dBu. AD/DA converters are 24-bit,“enhanced multibit,” 128-times oversampling, athird-generation step up from the converters used in previous MOTUinterfaces. Two channels of AES/EBU are also available. Bothwordclock I/O and an extra “AES Word In” allow theAES/EBU output to resolve independently to an external wordclocksource (more on this later). Inputs and outputs for all 12 channelshave 19-segment LED metering on the front panel for easyviewing.

The 1296 connects to the host computer via the PCI-324 card,which is included in the 1296 core system ($2,095). The 1296interface is compatible with MOTU’s other PCI-324 interfaces— including the 2408, 2408mkII, 1224, 308 and 24i — andcan be purchased separately as an expansion I/O ($1,795) for thosewho already own a MOTU core system. Up to three interfaces in anycombination can be connected to a single PCI card via Audio Wireconnectors, which are a high-bandwidth, low-latency, 72-channel,bidirectional digital format developed by MOTU that employs thesame socket components and cables as the 1394 (FireWire) protocol.Each PCI-324 card also provides an ADAT Sync In and an RS422 din-8“Control Track” connector for interfacing with MOTU’sDigital Timepiece for sample-accurate synchronization betweenADATs, DA-88s and other digital devices. Multiple MOTU interfacesautomatically resolve with each other via the PCI-324 card. Three1296 interfaces provide 36 simultaneous channels of 24-bit, 96kHzaudio I/O on a single PCI card.

The PCI-324 Console software controls routing of signal flow,sample rate, synchronization, buffering and monitor settings. Inaddition to being a perfect hardware fit for MOTU’s DigitalPerformer, the 1296 ships with standard ASIO and Wave drivers forcompatibility with third-party Mac and Windows audio software.Subject to the capability of the host software, the 1296 supportsboth 16- and 24-bit depths and can operate at 44.1, 48, 88.2 and96kHz sampling rates.

The 1296 core system also ships with AudioDesk, a full-featuredaudio workstation for Mac OS. Audio-Desk is basically DigitalPerformer without the MIDI features, and it is fully capable ofprofessional recording and mixing.

As with the original 2408, the initial setup of the 1296 couldnot be easier. The trickiest part of the whole process isinstalling the PCI-324 card. If you know how to install a PCI cardin your computer, you’re home free. A setup wizard on theinstallation CD helps you figure out the best way to set upconnections by asking specific questions about your gear and makingrecommendations based on your answers. For those who already have aPCI-324 core system, it is still necessary to install the latestversion of the software to allow proper configuration of the1296.

The manual is well-written and provides both Mac and Windowsversions in the same binding. The manual also provides explicitinstructions for interfacing the 1296 with Digital Performer,AudioDesk, Cubase VST and Sound Manager.

Once the software is properly installed, you’ll notice that younow have the options of 88.2- and 96kHz sampling rates in your hostsoftware. Choosing one of these higher sampling rates in thePCI-324 Console will automatically disable any other MOTUinterfaces connected to the PCI-324 that operate only at 44.1 and48 kHz, so be sure to also reassign the main monitor outputs to oneof the 1296 pairs if you want to hear the stereo bus output of anyprevious sessions.

The Audio Wire cable provided is 15 feet long, which is themaximum length recommended by MOTU. This will likely be long enoughfor most users, but if you keep your CPUs in a remote location fromyour working position, you may have to assess your setup to ensurethat you still have good visual contact with the front panel metersof the 1296.

I found the meters to be excellent and easily viewable fromacross an average-sized control room, so it’s not necessary to havethe 1296 located right next to you for normal operation. The meterscale ranges from -42 to -1 dB, with LEDs below -6 dB showing 3dBincrements, while those above -6 show 1dB increments from -4 to -1dB, allowing for fairly precise metering. There are two indicatorsfor “overs”: The first LED lights up only momentarily,whereas if even a single sample reaches full scale, thesecond-level LED remains illuminated until cleared in the software.I would have liked a Front Panel button for manually clearing the“over” LEDs.

Both the clip timeout and peak/hold timeout of the meters can beset by the user to any duration from a few seconds to a few minutesto infinity. A separate display to the left of the meters indicatessystem clock rates, AES/EBU clock rates and whether any sample rateconversion is taking place.

Both AudioDesk and Digital Performer automatically sense whenthe 1296 is active on the PCI card, allowing recording at thehigher sampling rates. Because I have already been recording 24-bitat 48 kHz into Digital Performer via my 1224 interface for a whilenow, I was immediately interested in creating some new 24-bitrecordings at 96 kHz.

For a lot of electronic-based recording (synths and samples), Ican get by just fine with a single audio interface, needing only afew inputs and one or two pairs of outputs for monitoring; a single1296 will work fine for many users who want to make the jump torecording and mixing at higher sampling rates. I have a trackingrack that contains a pair of Neve 1272 preamps and a few othergoodies, which I usually run everything through on the way to thecomputer, so I connected the rack’s XLR outputs to the 1296’s firstpair of inputs and wired four buses of my mixer to inputs 3 through6 and monitored playback of Digital Performer through outputs 1 and2.

A quick comparison between the 1296 and 1224 interfaces ofrecordings made at 48 kHz revealed no significant differences inquality, even though the 24-bit converters in each are a generationapart. However, I have always thought both the AD/DA converters inMOTU’s audio interfaces have sounded great, including even the20-bit converters in the original 2408.

After recording a basic track at both 48 kHz and 96 kHz with the1296, comparisons between the two versions did reveal a qualitativedifference. The 96kHz recording sounded a little more open overall— I wouldn’t say that I heard more top end (which it actuallycontains), but I would say that I could “feel” adifference between the two, with the 96 kHz sounding a shade more“realistic.” The effect is cumulative, and the moretracks you add at 96 kHz, the more you notice the difference.

A HANDSHAKE CAN REVEAL A LOT

As I mentioned earlier, the 1296 contains some versatilesynchronization and interfacing right out of the box. It canoperate internally at double the wordclock input rate, while theAES/EBU output can be synched to an independent word rate. Thisallows the 1296 to sync to incoming wordclock at 48 kHz (such asfrom a digital mixer) while operating internally at 96 kHz, and atthe same time providing an AES/EBU output synchronized to a DATplayer at 44.1 kHz.

I was recently involved in arranging and recording two days ofbig band sessions in Los Angeles with some of the best players intown. The client requested that we deliver Pro Tools stem mixes,which we created as 16-bit Pro Tools sessions at 44.1 kHz. Althoughthe stem mixes came out fine, the original masters had beenrecorded on a Studer 24-track machine at 15 ips with Dolby SR andhad really sounded great. Something had definitely been lost in thetranslation between the original analog masters and the Pro Toolsstems — mostly the “air” surrounding the band andthe detail at soft volume levels. Because I was also going tocreate 2-track mixes of the sessions, I thought this would be agood opportunity to really put the 1296 to the test.

A few weeks later, I went into Luminous Sound in Dallas with theoriginal 24-track masters, a computer setup running DigitalPerformer and the 1296. Setting up a desktop computer rig in thestudio has never been my idea of fun, but within a few minutes wehad the computer up and the 1296 patched: direct outputs split fromthe 24-track into the 1296 and the 1296 outputs straight into theconsole. Because I had only one 1296 for evaluation, each songtransfer would take two passes, which wasn’t a problem, as both the24-track and the computer were resolved to house sync. A littletone matching between the 24-track and the computer, and we were inbusiness.

I had previously created Digital Performer files for each tuneat 24-bit, 88.2 kHz, which would potentially make for an easiersample rate conversion down to CD later. Rob Weschler, the chiefengineer at Luminous, and I began our listening tests by comparingthe direct outputs of the first 12 tracks of the analog master(rhythm section and trumpets) to the output of the 1296’sconverters as a simple patch-through: No difference in sound,whatsoever. Next, we recorded a pass into Digital Performer andcompared it to the master: Again, no difference in sound,whatsoever.

All of the “air” surrounding the band that had beenmissing in the 16-bit stems was now just as present as on theoriginal master. In fact, we could not tell the difference betweenthe analog master and the 1296 output. After a second pass, all ofthe remaining tracks were now in the computer. After reducing themaster fader in Digital Performer to prevent output clipping of thestereo bus (all of the faders in Digital Performer were still setto 0 dB), we verified that all of the tracks had made it across andhappily moved on to the next song and repeated the process.

This was a recording of a live band (four-piece rhythm section,three trumpets, two trombones, four saxes and a bunch ofmics), so the dynamic range was very wide on some songs and littleto no compression had been used while recording the master. Somepiano and horn intros and entrances were at a whisper level, andsome big band swing sections really ripped. Never once did the 1296clip or distort on input, while all of the really dynamic,low-level material retained its full detail and clarity. Those ofyou who have already made the jump from 16-bit to 20- or 24-bitdigital recording already know the virtues of higher bit depthswith dynamic material. In my case, I found that the pleasing detailand analog coloration from the 24-track master were perfectlypreserved in the transfer process through the 1296. The result didnot sound better or worse than the master — it soundedexactly the same.

The 1296 provides audiophile recording on host-based systems,bridging the gap that had previously existed between MOTU’s otheraudio interfaces and the professional demanding sample rates higherthan 48 kHz. The converters sound excellent, and thesynchronization features solve several of the problems that occurwhen trying to resolve to different digital devices at the sametime.

No, the 1296 does not record at 192 kHz; but I’m still notconvinced that sampling rates above 96 kHz are worth theaccompanying overhead, as long as the bit rates are high and theconverters are good. In my tests, the 1296 output exactly what wasput into it as far as I — or anyone else — could tell.MOTU has another winner. I’ll buy this one and take a second,please. 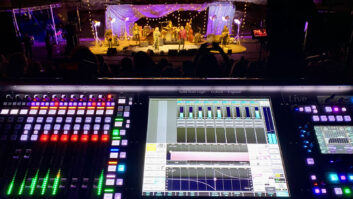