How did you get involved in making live sound mics?
Joe Walsh was the guy that pushed me into this. We’ve been building mics for communication and the ham radio industry since 1980. In that market, it’s all about articulation. When an ambulance goes down the road and someone’s speaking into a headset, they want to know if an address has a “b” or a “p,” or an “s” or an “f,” and hear that clearly, especially when lives are at stake. Articulation is golden. Joe Walsh knew that because he’s an avid ham operator. He said he wanted to take our Gold Series (communication mic) on tour with him, and I told him he was crazy. I had been out of the live sound biz for some time and I was shocked when I started looking at the quality of available mics for live sound. When I opened the mic Joe had been using on tour, I gasped. Then Joe and I started working on new technologies—based on large-diaphragm dynamics.

Last year, Kansas did its tour with a live symphony [Washburn University Orchestra] for the band’s 35th-anniversary DVD release, recorded without a single condenser mic—it was all Heil microphones. They sound great and have 40 dB of rear rejection. I can sit one beside an oboe player and not hear the trombone player two seats away. The polar pattern is what I call a Heil pattern—almost omnidirectional in the front, and behind it, it’s 40 dB down.

What’s wrong with condenser mics?
I hate condensers. They’re too sensitive, they pick up everything, they’re brittle on the top end. And people use them because of ego so somebody can say, “I have a condenser.” They were great years ago when they were hand-built, but not anymore—they’re brittle-sounding and all sound alike to me.

How do you get a condenser-type sound from a dynamic?
The PR 30 sounds like a condenser and doesn’t have that brittle top end. It’s from the diaphragm itself and how it’s set in there—and it can take 140dB SPLs. Walsh and I—two silly ham radio operators—figured it out, so you can blame ham radio for that. The first one I made for Joe was called the Gold Line Pro. It was a balanced line, 600-ohm version in the same body as our ham mic but had a completely different element. I only built that for Joe, but after a few people heard it and liked it, I formed a new division to make pro mics, and that model became the PR 20.

How did the drum mics come about?
In the drum mic market, you’ll find a lot of Chinese plastic stuff. Look inside some very expensive kick drum mics, and you’ll find a common $2 Chinese capsule. We took a German large-diaphragm element and put in a thicker diaphragm with a longer voice coil that has a cast zinc mic body and gets down to 30 cycles. Then we measured some well-known drummers on live stages and found that 50 to 100 Hz is the peak of most kick drums. So I put in a 10dB passive peak that adds 10 dB from 50 to 100 Hz, then added another peak from 4 to 6 kHz to emphasize the beater attack. The word I get from users is that they now only need to use one mic on kick—the PR 48.

Where do you see live sound heading in 10 years?
It’s getting more automated all the time. I hate it when I see these kids who’ve premixed their shows on a MacBook before getting to the arena. It scares me that automation is going to take over the process of listening. It’s a scary thing. And sound systems are getting smaller and smaller. We’re not getting the midrange vocal articulation because we’re not carrying the big drivers anymore.

You started off using Altec A4s—they were big, but didn’t sound so good.
They were huge, but then I discovered Olson bins. That was a subwoofer. Then we started building radial horns and front-loaded 15 [with JBL 2205s] cabinets in our own Fiberglas shop. And we used 64 [JBL] bullet tweeters—32 per side in a column array—it was a big hi-fi system. I miss those tweeters and big drivers.

What was your first gig for a major artist?
It was put on by Contemporary Productions around 1969 in St. Louis, with Jimi Hendrix, Iggy Pop and Janis Joplin. It was a big deal, with 48 Altec A7s—24 per side. McIntosh amps. Crazy stuff.

Were you mixing on Altec 1567s?
Exactly! Rotary knobs, and with two of them stacked for 10 channels! No EQ, no nothing, just a bunch of microphones and speakers. It wasn’t great, but it was loud.

And that inspired you to think this could be better?
Every job was like that. It goes back to my ham radio experience. Give me a soldering iron and I can be dangerous. “No” is not in my vocabulary. 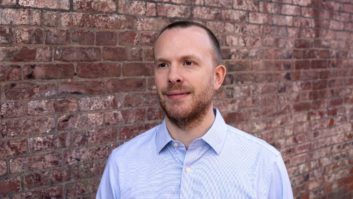