London, UK—To say that the Live Aid benefit concert was ambitious is an understatement. Held simultaneously at London’s Wembley Stadium and Philadelphia’s John F. Kennedy Stadium [See Part 2] on July 13, 1985, it was broadcast live to an estimated 40 percent of the world’s population and featured an all-star roster of artists who had to be shepherded on and off stage with almost split-second timing—whether they were ready or not.

And just to make things more difficult, the first time anyone really heard the PA, supplied by Malcolm Hill Associates, was when Status Quo kicked off proceedings with “Rockin’ All Over the World.”

In October 1984, a BBC News story on the under-reported famine in Ethiopia generated a worldwide outpouring of donations to relief agencies. It also inspired Band Aid, a group of about 40 musicians assembled by Bob Geldof of the Boomtown Rats and Midge Ure of Ultravox, to record a timely charity single, “Do They Know It’s Christmas?” Then Geldof had the bright idea to organize a bi-continental concert event to continue the fund-raising drive.

Owner Malcolm Hill’s company already had a reputation for handling very large events, including the likes of AC/DC’s Back in Black world tour and the U.K.’s Monsters of Rock festival, using its own Hill Audio products—mixing consoles, amplifiers, crossovers and speakers. On paper, the audio production for Live Aid was just a regular festival spec, according to Hill, with dual A/B desks and associated control gear at front of house and monitors, and dual sets of mics—the only items not manufactured by Hill Audio—and wedges. “Just a normal day at the office,” he says.

In total, 48 Hill M4 4-way cabinets were flown per side, with a stack of four per side for in-fill, controlled by a Hill 3-way stereo crossover. The M4 housed three long-coil 12-inch ATC speakers in a direct radiating/folded horn configuration and a pair of 10-inch dual-concentric Tannoy speakers plus, passively crossed over, a Renkus-Heinz horn and SSD 3301 compression driver. A combination of Hill TX1000 3-channel and DX3000 2-channel amplifiers provided power to the rig. TX1000 power amplifiers also drove two systems of tri-amped wedges, which used the same speaker components as the M4s. Hill C3 cabinets were available for side fill and drum fill use.

Out at the front of house mixing position, a pair of 32-input Hill M Series 3 desks were used, while with a pair of 32×10 versions were onstage at the monitor mix position. This was long before computers and plug-ins, of course, so the duplicate FOH racks were loaded with hardware such as AMS RMX16 and Roland SRE555 reverbs, Roland SDE3000 delays, Drawmer noise gates and compressor/limiters, and Eventide 910 and 949 Harmonizers.

While it was a typical gear list for a festival, things started to get complicated fast in the weeks leading up to July 13, when it was decided to broadcast the event live to TV viewers worldwide. Initially envisioned with 10 or 11 acts performing for the 72,000 concertgoers at Wembley Stadium, Live Aid’s bill soon mushroomed to nearly two-dozen artists as the enormity of the event and its charitable potential—not to mention the marketing benefit of a global TV audience—started to sink in.

The production was somewhat hamstrung by the smaller than optimum size of the stage, which was donated by Bruce Springsteen, who had performed at Wembley days earlier. For Live Aid, a revolving stage divided into three sections was added—for the current act, setup of the next act and breakdown of the previous act—and left little space for the cameras, monitor rig, band gear and hangers-on. A strict show schedule was imposed, with five-minute changeovers and sets of 10 or 15 minutes adhered to with clockwork precision. Later in the day, as the Philadelphia show got underway and TV coverage ping-ponged between performances at the two locations, changeovers were able to stretch out.

Savvier artists prepared themselves for the tight timing. Queen, famously, put together a 17-minute set that helped launch them to an even higher level of stardom. Others, like Ultravox, were more practical.

“I distinctly remember Ultravox choosing songs to perform which used the least equipment in order to eliminate the chances of something crucial not being patched in,” recalls Midge Ure. “Unlike regular guitar, bass and drums bands, we depended on hearing the DI’d synths/drum machines through the monitors, so we stuck to more traditional instrumentation for the majority of the set.”

He adds, “Both the live sound crew and the broadcast crew did an amazing job.”

Indeed, Hill puts the smooth running of the Wembley show down to the selfless contributions of volunteer Steve Dove, who had been working with Sony on Angus Young of AC/DC’s wireless guitar set-up. “Without him pacing backstage, fetching, coordinating and organizing the artists, the whole crazy venture would have totally fallen apart,” he says.

Problems with the mains power and generators during the several days of set-up prior to the Saturday show meant that the PA system was never checked on its own. Rather, the Hill crew were simply able to confirm that everything was at least passing audio during a handful of artists’ soundchecks and line checks.

A delay tower at FOH was hastily added and powered up on the Saturday morning of the show, at which time the PA was also covered by scrims painted with the Live Aid logo. But the logo was painted using emulsion, forcing engineers to drive the M4 rig’s high-end flat out to compensate for the lack of acoustic transparency.

During the show, there were mercifully few hiccups. A mis-patched mic sent Paul McCartney’s piano and vocal to the two separate FOH consoles when he launched into “Let It Be” almost before anyone noticed he was on stage. That came in the wake of a blown power breaker that took The Who off the air for a short time.

Continue on to Inside the Live Sound of Live Aid, Part 2: Philadelphia

“Was it perfect?” says Hill. “No, but it was magnificently better than doing nothing.”

Indeed, looking back, it’s the charitable impact that has had lasting effects, Hill says. “Friends of mine who run Hope for Justice, the modern-slavery charity, insist that Live Aid changed the mindset of the West to be more aware and pro-active in meeting the needs of struggling nations. And when a team from my church went to Ethiopia a few years ago, they were able to report that the relentless force that is Bob Geldof could be seen in the way aid is distributed, the road systems and even the political scene.”

For Hill, Live Aid was almost exactly half a lifetime ago. “Thirty-five years? That means I’ve lived for three more years after Live Aid than I had lived before.” 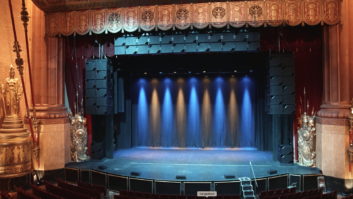