I’m loving the hot months of 2015. For one thing, Mix Nashville is coming back on August 29 to the refurbished facilities of Clair Global Southeast and the brand new stages and production rooms of The Blackbird Academy Live. This time, we’re building a one-day event, taking place on a Saturday, making it easy for more people to attend. There will be live sound, recording panels, demos, workshops, live performances and more. Learn about the program, sponsors, and registration at www.proaudioliveevent.com.

Summer NAMM just happened a few weeks ago, and while it may never see pro audio return as in the past, it had a lot more going on in that regard than I’ve seen since the move back. For the third year in a row, NAMM took place in Nashville’s new downtown Music City Center, which is perfectly placed near hotels, restaurants, live music, touristy hot spots and more. The show was busy with lots of attendees and some new pro audio companies opting in. The downside is that in this one-hall show, pro audio is scattered far and wide, so you have to keep your audio radar engaged to scope out booths tucked amidst guitars, drums and other MI goodies.

The NAMM high point for me was the expanded education panels. NAMM TEC Tracks and the new A3E (Advanced Audio + Applications Exchange) bowing for the first time at the show. The panel area was on the show floor with audio delivered to the crowd over wireless headphones. While it looks odd, it works better than you’d think, giving listeners a way to isolate themselves from the constant NAMM din.

A3E on Saturday started with the keynote delivered by Pete Brown, head of Developer Experience and Evangelism at Microsoft. The main takeaway from Pete’s address is that Windows 10, releasing as you read this, brings many new audio features that pros should love. For example, there will be codecs for FLAC and ALAC included, plus a MIDI application programming interface. This will allow third-party developers to address MIDI I/O directly to the OS, because it’s now built-in.

Another plus is how Windows 10 isolates audio on its own core. This eliminates audio glitches caused by DPC latency. DPC stands for Deferred Procedure Call, and it’s what happens while Bluetooth and wifi, among other protocols, are doing their thing. While wireless features are great additions to any portable device, laptop or PC, they can wreak havoc with your DAW. So why not turn them off? What if you’re interfacing with an app or device that has wireless features? Windows 10 lets you have it all by isolating audio on its own core, eliminating DPC latency. Pete even talked about delivering MIDI wirelessly in a future build, which brings it all full circle. The new OS operates on everything from your Android phone, tablet, PC, laptop, XBox, even your ATM, and is a free upgrade (for one year). This is pretty astounding if you think about it, but there is a reason. Microsoft’s goal is to have the OS on a billion devices in two to three years—the free upgrade should help do it.

Just after the keynote I moderated an A3E panel with Tony Cariddi, marketing director, audio, at Avid, and mega producer, musician, songwriter Rhett Lawrence. Tony’s first gig at Avid, was prompted by his desire to buy Pro Tools, and Rhett, along with engineer Dave Pensado, was the first producer to mix a record using the platform. The focus of the panel was the future of audio from the manufacturing side.

We touched on a number of questions, including “holes” in production and what Avid had in mind to fill them. Avid is big on a collaboration solution across all their gear, both video and audio. Tony mused on the ability to have built-in open collaboration between users on multiple systems on the same session, either in the same room, or across the globe, then being able to easily consolidate the changes much like tracking changes in a Word document. We also talked about the subscription model and how that would evolve, possibly including rental incentives and other add-ons that would make paying monthly for your DAW more likable. From the manufacturing side, this model means they can concentrate more on frequent upgrades with just a few features, rather than caching all the goodies for a massive yearly upgrade. Speaking of which, just three months after the launch of Pro Tools 12, 12.1 is out, offering some great enhancements for non-HD users including 128 Record channels and the Copy to Send shortcut—“Thank you,” said I. All upgrades are free if you’re on the Avid upgrade plan.

At the end of the panel we took questions, and Chris Knox from Oxford, Miss., asked if there were a way to help build some more backward compatibility into Avid devices (like ProControl), lost in the transition to Pro Tools 11, 12 and beyond. Rhett, a ProControl fan, chimed in, wondering if a third-party company could step up, writing new drivers, then giving Avid a piece of the pie? We never arrived at a conclusion but it was an interesting topic, and conversation. This is the quality of the conversation that will carry on to our upcoming event in August which will feature some of the top names in production from Music City and beyond. I hope to see you at Mix Nashville! 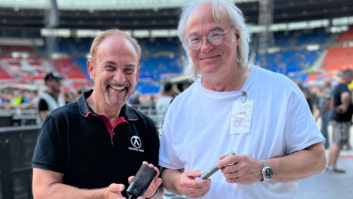