Several years ago, when AKG unveiled its C 3000, it was nearly an instant success, providing decent performance at a price that is quite low for a large-diaphragm studio condenser. Now AKG has replaced the venerable C 3000 with the C 3000B, another large-diaphragm model that retails at an affordable $498, including H100 shock-mount.

Despite being labeled as the “replacement” for the C 3000, the C 3000B is quite different, both in appearance and in sound. Unlike the familiar black look of its predecessor, the two-piece molded body of the C 3000B sports the same satin finish used in AKG’s SOLIDTUBE and C 4000B. Like the C 4000B, the C 3000B uses an electret condenser capsule, but in a fixed cardioid pattern.

Under the hood, the C 3000B capsule features a 1-inch-diameter gold-sputtered diaphragm with internal shock protection. The capsule is mounted in a unibody-style frame with gold contacts connecting directly to the circuit board that contains the mostly surface-mount electronics. Recessed switches on the mic body engage a -6dB/octave roll-off slope at 500 Hz and a 10dB pad that’s ahead of the preamp, providing for a maximum SPL of 136 dB.

The H100 shock-mount included with the mic offers excellent isolation from rumbles, bumps and stomps. To mount the mic, you slide it into a rotating collar that turns to cinch the mic into place. However, the difference between “open” and “locked” is a mere 11/420th turn of the ring. Although it never slipped during the testing, I would have felt better if the ring needed a greater turn to lock the mic. For another level of protection, I wrapped a couple of turns of rubber band around the mic stalk, near the XLR, after it was in the mount.

My first test of the C 3000B was a recording of hammer dulcimer. The mic provided a balanced sound that neatly captured all the delicate harmonics of the instrument, with just enough 8 to 12 kHz HF rise to keep the zing in the top end. The C 3000B has a slight dip around 5 kHz that gives it a sound more reminiscent of a C 414 set at cardioid than that of the original C 3000.

I found that the shock-mount impeded getting the exact positioning I needed when using the mic on a rack tom, but the mic fit into a generic 31/44-inch mic clip-in fact, a raised ridge on the mic stalk kept the mic securely in the clip. This close-in position revealed a fairly delicate-rather than sledgehammer-proximity effect, affording a natural reproduction that was full without being boomy. I started out with the pad in place but turned out not to need it; the pad’s effect on the mic tone was neutral.

AKG refers to the C 3000B’s polar response as an “acoustically optimized cardioid.” I would describe the pattern as more supercardioid in nature, with fairly tight directivity. This was great for keeping snare bleed out of a hi-hat, and a defined sweet spot that provided consistent levels was noticeable on vocals. This would be no problem with vocalists who stay still during the performance, but if your singer dances or jumps around during a recording, you’ll need a mic with a wider cardioid pattern.

Moving the mic back at least ten to 12 inches from the vocalist offered a smooth, natural response-I didn’t like the C 3000B’s sound in an extremely close, radio-style situation. Clearly, this is a mic that does best with a little air between it and the subject. The mic’s off-axis sound was quite agreeable. Move more than 45D off center, and the HF drops off more steeply than the mids; move even 90D to the side, the mid frequencies were never weird or honky. For handling vocal pops or plosives, an external pop filter screen was a better choice than the HP filter, which-kicking in at 500 Hz-was just right for rolling off lows from overhead cymbal mics, where the directionality of the C 3000B’s pattern could also be used to advantage.

Overall, the C 3000B offers a lot. It’s rugged enough for the hazards of live sound, has a low 14dBA noise floor that keeps pace with 24-bit studio recording systems, and its $498 list should appeal to just about anybody. 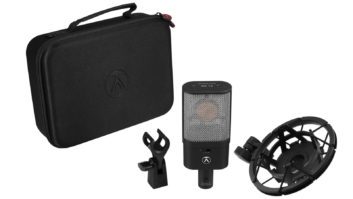