Los Angeles, CA (October 13, 2022)—The new recording studio at the Spotify At Mateo campus in downtown Los Angeles, jam-packed with an inspiring collection of vintage and new instruments and production equipment, is all about the vibe. “We wanted to build the un-corporate studio,” says Chris D’Angelo, Spotify’s head of production and studio facilities.

“Spotify loves to bring creators together and give them the tools that they need to help them be the best that they can be,” adds D’Angelo, former head of YouTube’s studios worldwide and a New Order fan. “Yes, you’re coming into an office, but we wanted it to be immediately obvious that a lot of thought went into this by the best people in the industry—and we knew we wanted it to be one of the best facilities in the world.”

You may know Spotify, headquartered in Sweden, as a global music streaming service, but it has been steadily morphing into an audio—and video—media company, acquiring podcast, audiobook and other businesses left and right. By the end of 2021, Spotify had reportedly become the biggest U.S. podcast platform, pushing Apple into second place. The company also creates music content, including Spotify Singles sessions, where artists re-record an original song, plus a cover. Some of the artists who have come through the new facility since it opened in December 2021 include Finneas, Japanese Breakfast, Bob Moses, Arooj Aftab and Snail Mail.

“The goal was to build something that was new, obviously, but with an old soul,” says William Garrett, Spotify’s senior music producer and studio development lead, adding that the studio team, which also includes audio engineer Jack Mason, an alumnus of New York’s MSR Studios, took inspiration from studios like Abbey Road, Capitol and EastWest/United Western. “But we didn’t want to copy them. We wanted to be our own thing.” A veteran producer, engineer and studio owner, Garrett previously helmed Spotify’s now-shuttered W. 18th Street studios in Manhattan.

Studio A is the jewel in the crown on the Spotify At Mateo campus, an approximately 150,000-square-foot collection of buildings in L.A.’s Arts District. In addition to offices for hundreds of Spotify employees, there are 18 podcast studios (collectively known as Pod City), a 600-capacity indoor live performance space, a Dolby Atmos screening room, a video insert stage with control and editing facilities, and listening rooms.

The Spotify team chose WSDG Walters-Storyk Design Group to thread the needle and fashion a recording studio that was neither a sterile, corporate environment nor a carbon copy of a classic facility. WSDG designed the 18th Street studios as well as a Brooklyn podcast complex for Gimlet, which Spotify acquired in 2019. The latter buildout was guided by Gimlet’s Austin Thompson, once of Chicago Recording Company and now overseeing Spotify’s podcast facilities worldwide as head of studio technology.

“We really did the work—in choosing the equipment, doing the construction the way it needed to be, and getting the materials that had to be there,” says Joshua Morris, COO and partner at WSDG. “[We were] composing the rooms and picking finishes and developing the volumes so that they can begin to make a new life and a new legacy.”

The acoustic-design plans were largely unimpeded by the building’s structure, Morris reports, and made the most of substantial ceiling heights and room volumes. Laid out along a hallway leading from the event hall, the music production facilities include Studio A’s 450-square-foot control room and 900-square-foot tracking space, plus two iso booths. Next door, Studio B is a 226-square-foot Dolby Atmos-equipped mix room with two small booths.

In A’s control room, Garrett says, “Sightlines into the iso booths were super important to us from a production standpoint. Also, the choice of a large analog console was very specific because we wanted the sonics and the feel of that in the room.”

A 48-channel Rupert Neve Designs 5088 Shelford analog console with swept 19-inch bays at either end, one housing the patchbay, dominates the control room. ATC SCM200ASL main monitors are positioned above a broad expanse of studio glass, offering an unobstructed view of the live room and booths. A pair of midfield ATC SCM45As are at meter-bridge height. The credenza is chock full of outboard gear, from API to UREI, and a 3M M79 half-inch, 2-track tape machine from Malibu’s Indigo Ranch sits to one side.

The mic collection offers a deep bench. “We have a beautiful vintage [AKG] C24, some vintage [Neumann] KM 84s and 87s, then we mix it up with Soyuz mics for surround capture, some sE mics, and a lot of Shure mics,” Garrett details. A Neumann U67 from Clinton Recording in Manhattan has pride of place: “It just lives in the vocal booth.”

Indeed, everything is essentially preset, Garrett says. “When a band enters the studio, we’ve already done some pre-production, so we know what the instrumentation and setup is. The drums are miked; keyboards are all around. They go to their stations, we fiddle with guitars and figure out what amps they want to use, and we’re rolling.”

Studio B was planned as a smaller session, overdub and post-production room that features a digital workflow. “We also wanted to future-proof the room for multiple emerging technologies for audio and video,” Garrett comments. Studio B opened with an Avid S4 24-channel worksurface and a 7.1.4 Dolby Atmos monitor setup of ATC SCM150ASL and SCM45A models, PMC TwoTwo5, TwoTwo6 and Wafer2 speakers, and ATC Pro Studio Sub 12s.

Sandwiched between Studios A and B is an echo chamber. “It started in a conversation about what would be exciting and unique for us to have,” Garrett says. “Once built, we dropped a vintage Altec 604 in there in a new cabinet. We have a binaural head, a pair of DPA 4011s plus a pair of DIY RE RM-5 ribbons, and, man, it sounds incredible.” A vintage EMT 140 plate, AKG BX 20 spring and various digital reverbs are also available.

The event hall is tied into Studio A in expectation of future live content production. In fact, all the rooms—studios, booths, video facilities, screening room—are interconnected for maximum flexibility.

There was one core requirement for the assorted podcast studios: “We wanted them to be built on the same technology and with the same acoustic principles” as Gimlet’s facility, D’Angelo says. “It was a conscious effort to make it super-easy so that artists and creators could go into the room and only have to worry about the conversation and stay focused in the moment.”

WSDG’s Morris chimes in: “Simple is hard. There’s a lot more to it than just going into a room, talking and pressing Record. To make it easy to use, to give parity between rooms, that’s difficult, not only technologically, but also acoustically. During this project, we had these different types and styles of rooms that we couldn’t treat the same, so there was a little bit of a learning curve for us.”

D’Angelo elaborates: “What I loved about what Gimlet had done is the technology stack,” with Dante networking and one-button operation enabled through customized interfaces and behind-the-scenes DSP and routing. Standardized gear includes Neumann BCM 705 microphones and KH Series speakers alongside a custom headphone system. “You get a sub-one-millisecond stream of your own audio into the headphones and a sub-four-millisecond stream of your mix-minus, so that you’re not hearing a slight delay in your head.

“It’s very important to us that they all work exactly in the same fashion, to sound the same, work the same, and be built off the same technology and principles,” D’Angelo sums up. “Gimlet built a fantastic system that we wanted to improve on, so we call this our G2.0 system.” 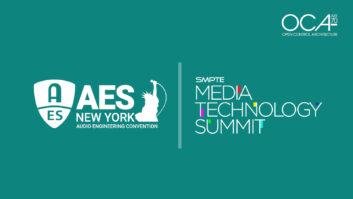