If you use a Mac at home or work, then by now you’ve probablyalready seen the ads, purchased the cocktail napkins and generallygotten caught up in the spin of Apple’s PR machine. But hang inthere, Genteel Reader (who am I kidding), as here lurks a fewchoice morsels for you… This month, I’m veering away from CES(which I covered last month) to discuss a follow-on show at SanFrancisco’s Moscone Center: Macworld. It was annoyingly busy,making it difficult for me to get my work done. I shouldn’tcomplain, though, as recent metrics indicate that 17% of newMacintosh purchases are by users switching from a Windows world.The new operating system, along with Gigabit Ethernet-equipped,five-slot CPUs and the new TiBook, fueled the big buzz and willpull in yet more converts and lapsed pilgrims. Though Apple hasn’tsent out my Solutions Provider copy of X, I can safely say that itwill beat the pants off Win ME as a desktop OS.

If you didn’t make it to my Pueblo by the Bay for the show, thenyou missed more networking, storage, productivity and rich mediatools than you can shake a CD-R at. Let’s start with the obviousstuff.

FireWire has come into its own, and Macworld’s home courtadvantage allowed storage vendors to show their hard drives,bridges, repeaters, way fast networking, DVD and CD-RW drives.More, cheaper, better. Now that Plextor does ATAPI, its mechanismsshowed up at several booths, disguised as external FireWire drives.Ecrix debuted its long-awaited, 1394-attached VXA tape drive, whichis all I’ll say about that for now, as a future column will getinto backup options and the new tape formats. Other storagestalwarts like Atto and Adaptec proclaimed their support for OS X,and 3ware showed its new midrange 1000BaseT SAN product, a firstfor the Mac OS space. Think SCSI over IP (block-level transfersrather than file), and you’ll begin to see why this trendy productcategory is heating up. More on that in the months ahead.

In other storage news, Arco Computer was one of several vendorstesting the Mac waters with a simple IDE RAID controller line— great for you tinkerers too cheap to buy a ready-made.Archos Technology was demo’ing its USB combo 6GB storage/MP3 playergadget, a fun item for you other tinkerers with disposable income.Those of you with a music or effects library in a jukebox willappreciate studioZee’s ZephIP, a widget that easily lets youcontrol your consumer TV, CD or DVD transport via infrared commandsfrom your Mac.

There were no fewer than four pure-play Digital Asset Managementvendors. This is another product/service class showing signs oflong-term growth.

On to the big excitement for me: Unix on PPC. Linux is thecurrent darling of the server set and is making significant inroadsinto the enterprise as well. But, despite the work of Eazel andothers, I don’t see Linux making a huge impact on the desktop.Enter another processor-independent, open-source project: Darwin,the basis for Apple’s OS X. During development, Apple’s goals werea simple and elegant UI, a modern, reliable kernel, killergraphics, the best Internet experience of any desktop OS, and,finally, gentle migration from the current, classic Macenvironment. Sounds like a plan.

OS X is scheduled for general availability before this issuehits the street, so I won’t bore you with stale stuff. But I didfind the double hit of new hardware and the new OS generally buoyedmy spirits. The four usable slot towers would make admirable studioprocessors and the new svelte portables are great for on-the-goproduction. But what really got me going was the small signs thatApple is now a Unix platform, with the accompanying up anddownside. The upside: unprecedented speed and stability, rapidmigration of existing hardware and software from other Unix flavorsand a wee peerage in the court of Enterprise Computing. Thedownside: weaker security without significant bolstering.

So, what about audio at the show? Oh yeah, audio. Other than tosay that Tascam had a small booth showing their nifty controlsurface, I’ll defer the discussion until OS X ships. Fear not,we’ll keep you informed as the plot thickens. Meanwhile, happymousing!

OMas works on content creation infrastructure issues andlives just up the hill from the site of the first Yerba Buenarancho. This column was created while under the influence ofRadiohead’s Kid A and Grant Hart’s Good News ForModern Man. Links and occasional commentary for“Bitstream” athttp://seneschal.net. 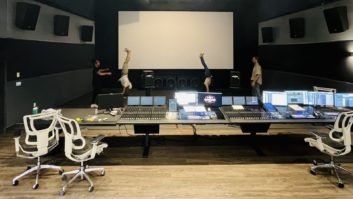