Portland, OR (January 4, 2023)—With a career that saw him work with everyone from Steely Dan to David Lynch, journeyman audio engineer John Neff wore many hats—producer, film mixer, songwriter, studio owner, radio host, label head and many more. That career came to an end, however, on December 27, 2022 when Neff passed in Portland, OR at the age of 71.

Born March 13, 1951 in Birmingham, Michigan, Neff broke into the music business in 1965 as a member of cult act The Ascots (“So Good”). Throughout the early 1970s, he worked as a session musician in Detroit, MI, often working for producer Don Davis at United Sound Systems—a regular gig that resulted in his playing on more than 125 records during his time there. The lure of the road called, however, and Neff spent much of the latter half of the 1970s on the road playing with the likes of Hoyt Axton and Steppenwolf.

Neff closed out the Seventies by moving to Hawaii; landing in Maui, he set up a studio to produce regional acts, founded Maui Zone Records which went on to release 26 albums, and hosted a local radio show for nine years. His reputation within the region’s music scene grew and in 1989, Walter Becker of Steely Dan asked Neff to build a studio for him on the island. Once it was completed, Neff wound up recording solo albums for both members of Steely Dan—Becker’s 1994 collection, Eleven Tracks of Whack, and Donald Fagen’s 1993 set, Kamakiriad.

Neff recounted those days later in a Mr. Bonzai interview for Mix, recalling, “Walter wanted everything available at all times—as does any studio owner—but the engineer is to disappear into the woodwork. I produced and engineered many albums on my own there, but on his and Donald Fagen’s CDs, creative input was frowned upon. We did some experimenting in the beginning. I think the most fun was the after-session, late-night ‘jams’ in the studio. On the technical side, working with those guys, and with Roger Nichols, was ‘graduate school.’ As Walter put it, ‘Donald slices a finer hair.’”

After moving to Phoenix, AZ in 1993 to open a studio, Neff also founded a studio design firm and connected with auteur David Lynch (Twin Peaks, Blue Velvet), creating a theater and professional recording facility (Asymmetrical Studio) in the director’s Los Angeles home. Neff quickly wound up running the studio, going on to work as a score engineer and re-recording mixer on Lynch’s Mulholland Drive and The Straight Story. Collaboration between the pair continued into other realms as they formed a duo, BlueBOB, and spent two years recording the project’s eponymous album, which was released in 2000.

“David Lynch, he is a true Renaissance Man,” he said, discussing the project in Mix. “There isn’t a moment he isn’t thinking. We go down some twisted roads, not everything works out, but man, do we find some interesting sounds!  For instance, on BlueBOB, he had me sing through his director’s megaphone into a beautiful tube U-47, with only multiple delays coming back into the headphones—no dry signal at all. You try that sometime.”

In the mid-2000s, Neff left partway through the creation of Lynch’s 2006 film Inland Empire, moving upstate to Marin County, where he freelanced at Sausalito’s Record Plant Studios, recording among other projects Journey’s multi-platinum Revelation album. He eventually headed further North to Portland, OR, where he opened yet another studio, The Lab, mixing films and music projects. Neff officially retired when he turned 70, closing the studio and selling off his recording equipment and guitars, though he continued to occasionally play live in others’ bands and produce some artists.

Looking back at his career in the early 2000s, he told Mix, “It’s funny—I was never huge at anything, but my education has never ended. Curiosity is a good thing.” 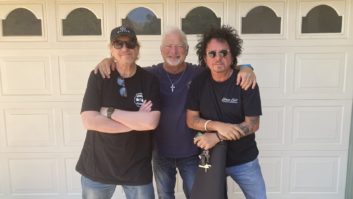