Behind many hit records is the sound of an enthusiastic liveaudience. Peter Frampton’s “Show Me the Way” and Lynyrd Skynyrd’s”Freebird” would not be the same without the sound of a huge andinvolved crowd. However, exciting audience sounds don’t just appear onthe soundtrack by accident; it takes planning and a knowledge ofaudience miking setups to create the impression that listeners aretruly part of a live musical event. Going into a recording orbroadcasting session, the engineer must have a good idea of whatbackground audience effects he or she wants. After 25 years ofrecording, I am still amazed by the constant challenges that I find inmiking audiences for live broadcasts and recordings. This articledescribes some of the microphones and techniques I have found to besuccessful.

To start, let’s look at the types of microphones most suitable foraudience miking. I typically select shotgun mics as a first choice,though I also use cardioid and omnidirectional mics in certainsituations. Among shotguns, the AKG CK69-ULS is my current favorite forgetting quality audience recordings, though I have also used this micin other applications and regard it as a valuable all-around recordingtool. The CK69-ULS shotgun element mates with the C480B body, whichmeans it’s adaptable to a number of capsules manufactured by AKGincluding the ever-popular CK-1 cardioid capsule. Also, the CK69-ULScapsule has two parts, and the mic may be set up as either a long or ashort shotgun.

The AKG C647 is a small shotgun-looking hypercardioid microphonedesigned primarily for podium use, but it also makes a terrificaudience microphone. It features a flexible gooseneck, is lightweightand is very easy to clip onto just about anything. Further, the priceis right, and the off-axis characteristic is reasonably smooth.

Something to remember about shotgun mics is that theultra-directional pattern is created through cancellation and addition;multiple signals reach the microphone element via the many slottedports on the shotgun body. Inevitably, not all frequencies cancel andadd ideally, and off-axis response can be very “peaky.” A lot ofmicrophones measure out well on paper, and the general specificationmay look great. But you have to be extremely aware of the off-axisfrequency response of your microphones, particularly in live work. Aquality microphone with good off-axis rejection will reject a lot moreunwanted rear signals, such as the P.A. This is important if you chooseto place audience microphones on the stage facing back toward theaudience, as I do. Find out what the polar pattern looks like, and ifyou have an opportunity to test it, do so. Using a microphone with pooroff-axis response in live situations can result in undesirablecoloration of the overall sound of your mix.

MIC LOCATION AND POSITIONING My typical audience miking setupincludes two microphones, one on either side of the stage, facing theaudience. I try to locate them as close to the null of the mainloudspeakers as possible. By the null, I mean to the side of anyloudspeakers, not the rear where you’ll get a fair amount of low-endenergy, and not the front, where you have all the horns andhigh-frequency drivers. Yes, low frequency is omnidirectional; however,typically most of the low end is rolled out of audience pickup micsanyway, so it’s not a major issue.

Another possible audience mic position is at the front-of-house mixposition where a stereo pair would do nicely, though signal delayrelative to the main loudspeakers and any onstage mics will beunavoidable. (The delay can be matched during mixdown, of course, butonly if there is a mixdown-not likely for a live radio broadcast-and ifthe audience tracks are recorded separately.) The room ambience pickedup on audience mics, with or without the delay between the stage and atthe front-of-house position, can be a very exciting artifact to includein a mix.

PZM microphones, hemispherical pickup pattern, placed on front-sidewalls work well in some situations. In some venues, the room geometrymay be such that neither the band nor the P.A. is sonically “visible”to PZM mics on the front-side walls, so the audience response tracksshould sound terrific.

Another setup involves wide-spaced cardioid mics or omnis hung fromthe ceiling. In low-ceilinged clubs or small venues, short shotgun micson the ceiling aimed across the top of the audience can provide a moreuniform audience blend. I try to group my audience pickup and take inas many individuals as possible in that group. At the right distance,the blend of the group becomes “tight,” and the resulting applause ismuch like the sound of hard, consistent rain on the roof.

However, small clubs with low ceilings can present a particularlytough challenge. You must somehow get a picture of the audience in yourstereo spectrum without hot-spotting the one jerk in the front who ismuttering something about somebody’s dog.

OUTDOOR VENUE MIKING SETUPS When setting up audience mics at anoutdoor venue, there are three main factors to consider. First, whereis the audience? Most of the audience is far from the stage front andthe typical microphone pickup points. There may be no convenient spotto put the microphones within the audience area. To bring the audienceto the microphones, you need to use “long-throw,” or shotgunmicrophones.

Second, how do you want the audience to sound? The final mix shouldhave a stereo spread that is exciting and realistic, yet contains someof the nuances of today’s more contemporary styles of mixing. I like tospread the audience across the entire stereo spectrum, from hard leftall the way over to hard right, with equal energy in between. To makethis work, a minimum of three microphones are needed; I like to usefour. I pick four audience zones to do the work for the entire audienceand choose the zones on the basis of whether I think they will be”intelligent,” will blend well with the rest of the mix and willrepresent the most responsive portion of the audience.

For picking up sound far out into the audience, I start with AKG’sCK69-ULS long shotguns and aim them so that the direct axis of the micvisually “hits” the ground at a distance of 100 to 200 feet. In mostoutdoor venues there is no back wall to cause reflections, so there isno concern about aiming the microphones too high.

I’ve found various combinations of smaller AKG mini-shotguns usefulfor close-up area-specific miking. For example, the AKG C647 and C580are primarily designed for podium use, but I have found them useful indifficult venues where placement is awkward. They sound particularlygood and are cost-effective. I often use the smaller shotguns for thefar left and far right zones in the stereo mix, whereas I typicallyplace the long shotguns at the 10 o’clock and 2 o’clock panpositions.

Finally, what is the recording environment? To take a recentexample, the annual “Opera in the Park” event draws around 20,000people to San Francisco’s Golden Gate Park, where the San FranciscoOpera kicks off its coming season with a day of highlights. From anengineering standpoint, the environment at this particular event ispretty awful. It’s cold in the morning, hotter than hell in theafternoon, and the wind blows sporadically all day. Shotguns and winddon’t go together well, but good-quality windscreens and a few wellplaced DIP switches can solve the wind problem. Fortunately, thewindscreens supplied with the CK69-ULS shotguns proved verysatisfactory. Also, since the CK69-ULS is based on the C480Bpreamplifier body, there are 70Hz and 150Hz roll-off switches available(slope is more than 12dB per octave). By rolling off at 70 Hz anddropping sensitivity by 10 dB (another onboard DIP switch), I was ableto defeat virtually all of the wind noise. This allowed us to leave themicrophones open at all times in order to pick up every response thatcame from the audience.

OTHER PATTERNS, OTHER ROOMS In a large indoor venue, it may bepossible to place audience mics in the “Lincoln boxes” on both sides ofthe stage. At least 20 to 30 feet away from the audience, this micposition is usually well out of the way of the P.A. mains and ensuresminimal “hot-spotting” of individuals. A cardioid mic will offer goodoff-axis rejection, minimizing the effects of nearby reflectiveboundaries, and will pick up a wide cross-section of people in front.Now combine this pair of “short throw” cardioids with two shotgun micsaimed farther into the audience. The shotguns will pick up a wholedifferent section of audience, yet they may even share the same micstands as the cardioids. The two mic positions, left and right, providefour mic inputs for a good stereo sweep across your mix.

Omnidirectional microphones may also be used for audience miking,but be careful-omnis will pick up everything, and the results can beeither great or horrible. In general, I use omnis in more ambientspaces, where the sonic characteristics of the room are worthcapturing. My favorite omnis are the Earthworks TC30Ks; they are clean,accurate, flat and allow me to tailor the room sound to blend with thedirect mix from the stage inputs. However, the nondiscriminatorycharacteristics of omni mics can leave me at the mercy of just aboutanything that goes on in the room. With a spontaneous and volatilecrowd, omni mics may not be the best choice.

HORSES FOR COURSES Finally, there are nontechnical factors that willaffect your microphone selection and positioning choices. Every one ofmy projects demands that I give the best I possibly can, and when I amdoing exacting work for discerning clients, I tend to use my bestprecision microphones. On the other hand, it does not make good senseto put out your most valuable assets when you know that stage diving isthe rule. For such events, Shure SM57s have been the audiencemicrophones of choice-and they do work well. I have had several pairsof Sennheisers thrown off the stage and immersed in 18 inches of liquidmud (Sennheiser provided great repair and a quick turnaround). I’vealso had union engineers return microphones to me with fresh wood stagesplinters protruding from the grille covers. “I don’t know how ithappened,” they shrug.

If the object of the exercise is to record the room for the sake ofthe room, then it’s anybody’s artistic call. If the object is to recordaudience, to get audience response as part of a musical reocrding, thenthe objective is to get a great recording of the performance and allowthe audience (in that performance) to add the audience’s appreciation,not to add coloration or other distracting artifacts to theperformance. Your off-axis coloration, the type of microphones you use,where you place them and what direction, are all going to play a partin a large sonic equation. The laws of physics and good horse sensewill always prevail. 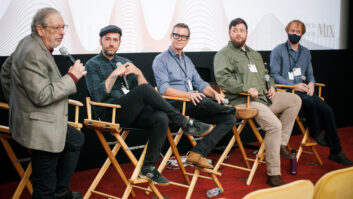