London, UK (January 5, 2023)—Like many artists coming back from the pandemic, Australian singer/songwriter Courtney Barnett spent much of 2022 on the road, bringing her trademark witty style to the masses as she supported her third studio album, Things Take Time, Take Time, which was released in November, 2021. The resulting tour found her traveling the world with her band and crew, playing everywhere from small clubs to festivals to opening for The Rolling Stones’ 60th Anniversary show at BST Hyde Park. Two consistent aspects throughout that time however, were the stageside presence of monitor engineer Kessiah Gordon, who began working with the artist just as the album dropped, and the journey’s audio provider, Eighth Day Sound.

Over the course of 2022, Gordon sent sound to the band’s Ultimate Ears UE11 molds via Sennheiser 2050 dual transmitters, corralling mixes together on Yamaha Rivage mixers. “When I first joined the crew, Jason Tarulli [FOH engineer at the time] wanted to give Yamaha’s Rivage a try, specifically the PM3,” said Gordon. “Neither of us had toured with the desk before, so it was really exciting to support each other’s respective curiosities and explorations of the console. I brought with me my knowledge of the CL/QL series which helped a lot, and I also enjoyed watching all of the online tutorials offered by Yamaha. With limited rehearsals and tech days, I hit the ground running and I’ve been using Rivage ever since. I absolutely love it!”

As the FOH role changed, however, the tour’s production package changed as well; the final version included an Avid Venue S6L 24C desk out in the house and a PM5 for monitor mixing. “On this [UK] run, we’re in a trailer, and Emma Hawkes, our amazing tour and production manager, really helped to facilitate our needs; she’s been a great proponent of us having the consoles we want,” Gordon enthused, adding that Eighth Day Sound’s account handler, Stuart Gilmore, was likewise a crucial contact for the production: “Relationships with vendors can feel transactional at times, and it was refreshing to experience something different with Stuart…. I had a brief shop day in London, [at the Clair Global Twickenham offices where Eighth Day Sound resides in the UK], and I got to meet Stuart for the first time in person after a year of working together. It was great to be able to shake his hand. I toured the facility and met the team who put our package together. They were just so lovely and answered all our questions.”

With the tour cycle behind Things Take Time, Take Time now complete, Gordon looks back at the journey as a huge success, recalling, “When I was getting to know Courtney and the band during rehearsals, one thing I was trying to gauge was what the dynamic might look like between us all. I said, ‘you know, if you can trust me, I’d really love to give this a shot in how I think things should sound. Then if you have any suggestions or things that you’re partial to, of course, let me know and we’ll roll from there.’ I was impressed with how open and receptive they were to my offering. They seemed happy, and any changes were just a little dB here and there. That was a joyful and affirming moment for me as an engineer.” 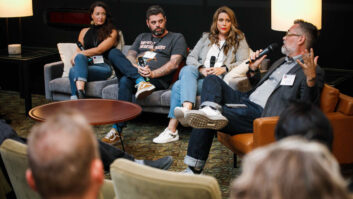