A glance at Vitamin’s GUI initially led me to surmise the plug-in combines a harmonic exciter, stereo imager and transient shaper. But it turns out the inside story is a bit different. Vitamin uses hidden multiband compressors and clippers to generate harmonics more subtly than most exciters, and its transient processor affects only that portion of processed signal.

The cross-platform plug-in is available for both SoundGrid and Native systems in Audio Units, AAX Native 64-bit, TDM, RTAS, AudioSuite, VST and VST3 formats. (SoundGrid is a low-latency, DSP-based platform that runs off Waves’ Intel-based servers.) Mono and stereo configurations are included. I reviewed the Native AU version of Vitamin in Digital Performer Version 8.06 on an 8-core Mac Pro running OS X 10.8.5.

Waves was understandably circumspect in giving me the full particulars of their proprietary processing, but here’s the gist: Vitamin splits input audio into two parallel paths. One path is home to the dry input signal; its gain is adjusted using the plug-in’s Direct Gain slider, an attenuator. The other path is split into five contiguous frequency bands—LO, LOMID, MID, HIMID and HI—that are treated by adaptive, nonlinear processing: a clipper generates odd harmonics (primarily the 3rd harmonic), and a secret dynamics processor adds additional harmonic distortion. No threshold, ratio, drive or other controls are provided for these unseen dynamics processors; the depth of processing and amount of harmonic coloration they add are virtually constant in each band, irrespective of applied gain. Five sliders situated in the center of the GUI adjust the gain—from 0 to 48 dB—of the harmonically enhanced signal in Vitamin’s five bands. Think of the five bands as containers for secret sauce and their gain sliders as spigots for adding more or less (or, at 0dB setting, none) of the sauce to the dry signal. To hear Vitamin’s wet signal in isolation, lower the Direct Gain slider all the way.

Once you’ve established the desired relative balance of the five bands’ gain sliders, you can raise or lower them together using a master control that preserves their offsets. Each band can be independently soloed or bypassed (or soloed and bypassed; see the “Try This” sidebar). When you solo a band, you hear both the dry and wet signal components in that band. Bypass a band to mute its wet signal component. Crossovers for Vitamin’s five bands are adjusted much like with other multiband Waves plug-ins (such as C4 and C6), using controls situated above and between each band’s gain slider. A global Punch control adds presence to transients in the harmonically enhanced signal when set to a value above 0 (its lowest possible setting); Waves is hush-hush about exactly how it does this.

Vitamin’s stereo configuration also offers a continuously variable stereo-width control for each of its five bands, along with a Width Master control that executes their simultaneous adjustment. The stereo-width controls affect both the dry and wet signal components for their respective bands.

Unfortunately, these controls are completely disabled when their respective bands’ bypass buttons are engaged; I found myself wishing I could adjust the stereo imaging for the dry signal with harmonics processing bypassed. At their extreme settings, the stereo-width controls can collapse a band’s image to mono or widen the stereo field considerably.

Vitamin also provides global input- and output-gain controls—each affording up to 18 dB boost or cut—and associated L/R level meters. Use the plug-in’s trim control to counter digital overs and optimize output levels with one click. All gain, imaging and crossover controls provide numerical readouts, as do the meters and singular trim and punch controls.

Indicators atop the I/O meters light red when the input or output exceeds 0 dBFS. But because Vitamin processes and outputs 32-bit floating-point audio, the plug-in’s output doesn’t clip at 0 dBFS. Vitamin’s generous headroom provides a convenient failsafe, as any plug-in that adds harmonics has a propensity to produce “overs.” Another comfort: The plug-in’s processing produces zero latency, making Vitamin suitable for use in both studio and live situations.

As with all Waves plug-ins, the WaveSystem Toolbar is included; it provides 32 levels of Undo and Redo, A and B workspaces and preset-management facilities.

I got great results using Vitamin on a clinical, midrange-y kick drum track. I raised the LO band’s gain slider to around 19 dB, set its crossover to 55 Hz and raised the Punch value to 2.1. The result was punchier, fuller and richer-sounding. You may wonder how harmonics generated in a sub-bass band can make a track sound richer. But when adjusting Vitamin’s crossovers, it’s important to realize that the 3rd harmonics generated from fundamentals at the high end of the band will be an octave plus perfect fifth higher in frequency than the crossover itself. My 55Hz crossover setting resulted in adding 3rd harmonics as high as 165 Hz to the track.

Next up was a top-miked snare drum track that sounded too much like a muffled bongo. Cranking the HI band’s gain almost to the max and goosing the Punch control gave the track sorely needed snap but made it sound too thin and brittle. Adding generous amounts of LOMID, MID and HIMID gain balanced the tone beautifully. That said, I could simulate much greater snare sizzle using distortion plug-ins or a Lexicon resonant-chords effect.

Happily, Vitamin’s processing greatly improved a muddy-sounding, strummed acoustic guitar track on an up-tempo, rock-tinged country number. Applying around 24 dB of gain in the HIMID band (with crossovers set to 463 and 9,310 Hz) tightened and clarified the sound in a way my best plug-ins that emulate passive equalization could not. Goosing the Punch control a little enhanced the track’s flattering percussive quality. Using the bands’ stereo-width controls, I widened the spectrum above 463 Hz and collapsed frequencies below 122 Hz to mono to create a beautiful stereo spread. The processed track’s timbre sounded a tad edgy when soloed but excellent when folded into the mix. Isn’t that often the case when mixing?

I wasn’t impressed overall with using Vitamin on full mixes. The harmonic enhancement was not discriminating enough in its effect for me to feel like I could use it without incurring collateral damage. However, I liked using the stereo-width controls to focus the bass and widen highs (similar to what I did on acoustic guitar). On a practical note, I was mildly disappointed that the master gain control wouldn’t lower any raised band-gain sliders if one was already bottomed out. (The workaround was to temporarily raise the bottomed-out fader.) The master width control exhibited the same behavior.

Vitamin is not a distortion plug-in, per se. It takes a heavy hand to add grit, and even then it’s relatively subtle. Due to its additive processing, using Vitamin to sculpt the tone of tracks is not always an intuitive process. Especially where excess energy in a particular frequency band needs to be attenuated, it can take a bit of trial and error adding harmonic enhancement in different bands to achieve the desired spectral balance.

Vitamin’s forte—in addition to enhancing transients and stereo imaging—is clarifying muddy-sounding tracks and enriching those that sound sterile and starved of harmonics. It’s not something I would slap on every track, but it’s useful for getting unique timbres not achievable using EQ plug-ins. Bottom line: If you’ve already got your plug-in pantry fully stocked with the essentials and are looking for a secret sauce to jack up your arsenal, Vitamin is worth considering.

CONS: Getting great sounds can take some trial and error. Stereo-width and band-gain controls share bypasses. Punch control only affects harmonics-enhanced signal. Master controls can’t lower slaves if one is bottomed out.

When setting the crossovers for one of Vitamin’s five bands, it’s helpful to hear only its direct (dry) signal component. To accomplish this, activate both the solo and bypass buttons for the band. You can also toggle the bypass button off and on (while the solo button is activated) to alternately hear the band-limited dry signal with and without the band’s processing, respectively. This is a great way to gauge how much processing you’re adding in a specific band, relative to its dry signal. 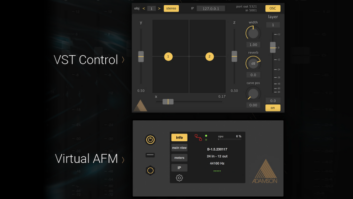