At one time, reviewers often concluded that self-powered near-fieldmonitors costing $1,500 or less rivaled the quality of ones costingtwice as much. With the $3,000-$5,000 range undergoing their own quietrevolution, this claim can hardly be made today. For example, theBM15A-an updated, active version of Dynaudio Acoustics’ TEC-nominatedBM15-is a near-field self-powered monitor whose quality cannot bebought at half the price.

As one might expect from Dynaudio (a company that made its namebuilding hi-fi speakers before entering the professional arena), theBM15As simply sound good. Although my ATC 50As are characterized by amore crystalline accuracy (at twice the price), the BM15As have asweetness and warmth that makes musical playback an indefatigablepleasure.

With a matte-black finish, beveled edges, bass port and rigid,weighty construction, the BM15A is a professional product from tweeterto woofer. At 42 pounds, the monitor is a two-way design, with the low-and high-frequency drivers powered by 200W and 100W discrete MOSFETamps. The crossover is a 5th-order phase-aligned design centered at 1.7kHz.

Front panel LEDs indicate power-on, the engagement of protectioncircuitry and low-frequency clipping. Rear controls allow the user totrim high and low frequencies with low-Q equalizers (6 dB at 15 kHz and50 Hz). Inputs are balanced and include toggle switches to varysensitivity between +4 and -10 dBm.

The soft-dome tweeter is Dynaudio’s high-headroom “Esotec” type,upgraded from an earlier version found on the BM15. The Esotec tweeteris a doped, soft-dome, ferrofluid-cooled design, which Dynaudio claimscan handle transients of 1,000W. The monitor’s 9.5-inch bass driver,however, incorporates Dynaudio’s most impressive innovations. With alarge dust cap integrated into the cone/dome assembly, aluminumhexagonal wire used for its high-excursion, low-mass 4-inch voicecoils, and magnets placed at the center of the drivers, the mechanismis simple and lightweight. The magnet’s central location even providesinherent shielding. Efficiency is enhanced by the unusual placement ofa second ceramic on the top plate in order to concentrate flux into thegap.

My use of the BM15As during an unusual recording session for IngramMarshall’s forthcoming CD (Dark Waters on New Albion Records) speaks totheir versatility. The piece combines live English horn-which issimultaneously processed through a digital delay-with a prerecordedsample collage on DAT. Rather than feed the outputs from the delay andDAT direct to tape, a single Soundfield SPS 422 Microphone System wasused to record the ambient mix of the English horn combined with thedelay and DAT played through the BM15As in a fabulously reverberantchurch.

Thanks to the virtues of the BM15As, we were able to create anorganic mix of live and reinforced sound. Although the monitors werelight enough to carry and maneuver, their output filled the church’scavernous nave. Through careful positioning, we were able to avoid bothfeedback and the comb filtering “Grateful Dead bootleg sound effect”artifacts, which can plague recordings of reinforced audio. Although asimilar production could have been created with Pro Tools and somechoice plug-ins, the result might not have equaled what we were able toachieve through the collision of real waves in real space. Few readersare looking for monitors applied simultaneously for recording live andreinforced sound, yet the success with which we were able to use theBM15As in this unconventional way indicates something of theirprowess.

Though Dynaudio lists the frequency response as 40 to 20k Hz (+/-3dB), I found the bass response more prominent than this spec mightsuggest. In addition, Dynaudio instructs users to position each monitorwith its off-center port closest to its stereo partner (ports on theinside, tweeters on the outside) in order to enhance bass coupling.

Indeed, during the BM15A’s extended visit to my studio, I wasconsistently impressed with the chocolatey goodness of their mid to lowfrequencies-perfect for the piano samples I was frequently using duringthis period, and perfect for the Sade and Tracy Chapman I would listento during breaks. At the same time, the BM15As did not want for snap orpunch, from Gettin’ Jiggy with Will Smith, to heralding Stravinsky’sRite of Spring.

As with any self-respecting near-field monitor (actually, Dynaudiocatalogs the BM15As as near/mid-fields), these pups can bark, with SPLsmaxing out at 105 dB at 1 meter. Simply put, from project studioslooking for an all-purpose pair to larger studios searching for someserious near-fields, the BM15As are worthy contenders.

Arthur Bloom’s An Orchestra’s Guide to the Young Person was thesubject of a documentary on NPR’s Performance Today last summer and wasperformed by the Israeli Chamber Orchestra conducted by PhilippeEntrement in November at the Kravis Center of the Performing Arts inFlorida. He can be spammed at [email protected].

The woofer is an impressive 8-inch Dynaudio 24W100. This uniquedriver incorporates a one piece, straight wall, polypropylene cone/dustcap, a 11/42-roll rubber surround and a 6-inch diameter spider. Thestamped steel basket includes an integrated housing for the inherentlyshielded, neodymium motor structure. The motor structure iscomplemented with a 4-inch diameter voicecoil wound onto an aluminumbobbin. This speaker is capable of high linear excursion, whichtranslates to extended bass at high sound levels. Electricalterminations are dual 11/44-inch male connectors.

The Dynaudio D-260DA tweeter uses a nearly half-sphere, treatedcloth dome with a 111/48-inch diameter, underhung voicecoil wound ontoa vented aluminum bobbin. The deep dome increases stiffness withoutresorting to hard materials that are not as well-damped. Thenon-shielded, ferrofluid-cooled motor structure is vented into asealed, plastic cup in order to lower the tweeter’s resonant frequencyand linearize the tweeter’s phase response at crossover. All of this issecured onto a cast aluminum waveguide/faceplate. A three-leggedaluminum cage is mounted onto the front of the faceplate to protect thediaphragm. Diametrically opposed voicecoil leadouts provide stabilityand balance and are terminated by dual 11/44-inch male connectors.

The amplifier has a balanced XLR input with a +4/-10dBm sensitivityswitch. Trim pots for both the woofer and the tweeter range from -3 dBto +3 dB. The amplifier’s neatly arranged, double-sided, glass epoxycircuit board has plated-through holes. All components ard constructionare of top quality. A low hum field toroidal transformer is used in thepower supply.

ACOUSTICAL CHARACTERISTICS Like the Yamaha NS-10M and SundholmAcoustics monitor (both of which we have tested), the BM15A’s sonicfootprint resembles that of a consumer loudspeaker. These monitors arenot flat and they are not designed to be flat. They enable therecording engineer to hear the track the way much of the populationhears it, as if through a home stereo, rack system, portable system, orautomobile. In fact, except for the decade between 500 Hz and 5,000 Hz,the response is smooth. The off-axis response isn’t flat either, butit’s smooth and well-controlled, tapering only -2 dB from 1,000 Hz tobeyond 10,000 Hz.

The distortion response, which was measured at around 95 dB SPL,indicates that the THD remains at approximately 1%, except for thetweeter’s upper response limit. The spectral contamination, a testcomprised of an input of multiple tones, tests the speaker’sself-noise. This particular speaker system had an impressivesignal-to-noise ratio of around 55 dB. 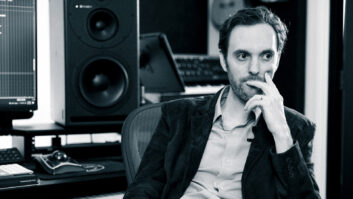