Ricky Martin has been stopping traffic lately. Literally. Performances on the streets of New York, Los Angeles, Toronto and elsewhere, on the heels of the wildly successful “Livin’ La Vida Loca,” have drawn riotous but adoring mobs smitten by the doe-eyed 27-year-old’s good looks and winning style. And while Martin stops traffic, the only thing that finally stopped “La Vida” on the charts was the top. That, and the fact that there are simply a finite number of countries in the world with radio stations.

This record, which catapulted Martin onto the covers of magazines ranging from People to Time, is significant in a number of ways. For starters, it may herald a new wave of Latino influence on mainstream pop music, in much the same way that Garth Brooks and other members of the so-called “Class of ’89” put country music’s imprint onto the larger pop track-an influence still visible in crossovers like Shania Twain and Faith Hill.

Unlike another shooting-star recording, 1996’s novelty hit, “La Macarena,” Martin’s “Livin’ La Vida Loca” is the payoff for a long career of hard work. After a stint in the adolescent sensation Menudo in the 1980s, Martin embarked on a carefully plotted and arduous path toward stardom, building an acting career in New York and Los Angeles by playing a running character on General Hospital and appearing as Marius in the Broadway play Les Miserables. Along the way, he made records for the Latino market, selling 15 million units before “La Vida” ever hit the airwaves. This is not the resume of your typical one-hit wonder.

On a completely different level, “La Vida” is a milestone of technology: the first Number One record to be done completely within a hard disk system. In addition to changing the course of mainstream pop music, “La Vida” may also turn out to be a pivot point in how records are made.

“Livin’ La Vida Loca” was recorded in Miami, at The Gentlemen’s Club (profiled in the February 1999 issue of Mix), the three-room, all-Pro Tools personal recording facility of Desmond Child. The musical auteur’s ineffable knack for crafting perfect pop songs that often sell in Platinum increments has made him a producer in very high demand. Child’s tracks include most of Bon Jovi’s Slippery When Wet, a landmark in big-hair rock with anthems like “Livin’ on a Prayer,” through cuts for Aerosmith (“Angel,” “Dude Looks Like a Lady”), Joan Jett, Cher, Megadeth, Trisha Yearwood and Alice Cooper. Child now writes with production in mind.

So it was with Ricky Martin, with whom Child began working in early 1997 at the behest of Martin’s manager, Angelo Medina. “From the very beginning, the demo was the record,” says Charles Dye, at the time the staff engineer at The Gentlemen’s Club and the primary recording and mix engineer on Martin’s debut English-language album. “It’s not even fair to call what Desmond did a demo, since we don’t think of it as that. All the recording that went on, even as the song was being written, was considered part of the final recording, because when you’re working in the digital domain, you don’t have to redo tracks.”

“La Vida” was written sometime in the last half of 1998, by Child and Robi Rosa, another Menudo veteran who co-wrote most of the songs with Child and also co-produced much of the album. If success has many fathers, this album is a paternity suit. Child is listed as producer on eight of the CD’s 14 tracks. Eleven producers, including Walter Afanasieff, Jon Secada and Madonna, are listed, and 28 primary recording and mixing technicians are listed in various roles on assorted songs, with at least an equal number of assistant engineers.

Child and Rosa worked out the song in Child’s writing room on keyboards, with a decidedly low-tech boom box cassette recorder running constantly to document the composing process. Once the structure was worked out, Child handed the song over to programmer Randy Cantor, who set about creating sequenced drum, percussion and synthesizer parts, which would become the basis of the recording. Those parts were recorded through a Mackie 32+24*8 console to a 64-channel Pro Tools system. Rosa penciled in a rough vocal for the purposes of showing the song to Martin, his management and record-label executives. But even here, the expectation was that the song would fly, and all the parts were done with a final version in mind. Rosa also added some acoustic rhythm guitar parts, recorded directly to Pro Tools.

The tracks were then turned over to Dye for additional recording. The horn parts, some of which were used to augment layered synthesized horn parts and others for riffs, were played on flugelhorn and trombone by Tony Concepcion. All of the recording was done direct, without a console; Dye miked the horns with an AKG C-12VR, placing it rather close in on the bell. “I wanted a very in-your-face sort of sound,” he explains. “Other [horn] tracks on the record have that sort of mariachi/cantina sound to them at times, but for this song we wanted it brash and sharp.” The rest of the signal chain was a Focusrite Red preamp, an Empirical Labs Distressor for compression, and Pultec EQP-1A and Neve 1031 equalizers. The same signal chain was used for live percussion parts.

Not all percussion was created live. Some unexpected instruments were enhanced with Pro Tools plug-ins. “We wanted a gong at the downbeat of verse two when the band comes back in, but Rafael Solano, the percussionist, didn’t have one with him. So we had to figure out how to make one,” Dye says. “What we did was have Rafael hit the largest cymbal he had with a soft mallet. Then using a Pro Tools AudioSuite, plug-in I pitched it down two octaves, and with the time correction off, it made the length of the cymbal longer as well. Now it was deep enough but it had no sheen, so by then adding back in the original cymbal, we ended up with what sounded like a very realistic gong.”

The benefits of a purely random-access recording system were particularly evident in situations like this, where the producers are also the composers, says Dye. “It operates in a bars-and-beats mode, which means you can keep to the musical form while you’re editing-you can think musically, which is what Desmond likes to do,” he says. “He gets to experiment with the structure of the song and still use the parts that will be on the final record.”

The tag chorus is a perfect example. Each chorus repeats the title line of the song three times before heading back into the next section. On the tag, Child felt that it robbed the track of some of its momentum as the song built to a climax. Dye edited out the additional two hook lines in between the two outro choruses-the equivalent of a 2-inch across-the-tape edit on analog multitrack tape-a decision that was made after listening to a final mix.

Martin also sang to the C-12, with no equalization but with careful compression, which Dye believes is critical as word-length resolution increases. “If you record without compression in a 24-bit environment, when you bring up the quieter parts of the vocal later you’re actually bringing up lower-resolution data, like eight bits, because there’s less information there,” he explains. “It’s not using the full word length. It sounds grainy. If you compress that later, you’re just compressing that. So you want to compress going in.” To compensate, Dye used a Distressor set at a 6:1 ratio.

Martin’s vocals also showed off how deep the pool of third-party plug-in modules for the Pro Tools system has become. Dye used a split Harmonizer-like effect from a DSP plug-in to add depth to the vocals: He split and hard-panned the effected signal with one side tuned up nine cents and delayed 18 milliseconds, and the other down the same value and delayed at 24 milliseconds, and then put a lowpass filter at 16 kHz to make the effect less obvious. “It’s a trick I learned from Bob Clearmountain-I read it in a magazine years ago,” he says. Dye makes liberal use of plug-ins such as Waves’ Renaissance EQ and compression. But don’t overdo it, he cautions. “You can’t auto-tune horn ensembles. It just sounds terrible. What makes horns sound great together are the dissonances from their overtones and harmonics. It gives you a warm chorusing effect. If you try to auto-tune them, it sounds like sampled horns.”

But it is the non-technical aspects of the vocal that illustrate what the song is about. Child is known for his ability to coax great vocals out of singers, and in the process, he works more like a film director than a music producer. “We wanted it fun, like the song itself was,” says Child. “When we were writing it, Sinatra had just passed away, and as we listened to a lot of his stuff, we incorporated a Rat Pack-era style to it, a kind of Pulp Fiction vibe, and that comes through in the vocal. The song worked well with Ricky’s mischievous side.”

Child says that Martin did several passes at the vocal, and the final take was comped from them. The noir-ish vocal approach is buttressed throughout the song with small but telling accoutrements, notably the surf-like guitar part (one of Rosa’s production inspirations, performed by Los Angeles-based session player Rusty Anderson to an ADAT tape with a slaved two-mix from the Pro Tools).

Martin’s career may be watched as a barometer of Latino influences on mainstream pop music, but “Livin’ La Vida Loca” was written by a master tunesmith whose metier is decidedly Anglo, linguistically speaking; the only Spanish words in the song are its title, and they’re easily decipherable by anyone with even a passing knowledge of the language. Dye concurs, and acknowledges that he was asked, at certain points in the recording of Ricky Martin, to “tone down” some of Latin elements, such as some of the percussion. “There are some songs on the record that wear their Latin nature on their sleeve,” he says. “But that’s not really the case with ‘La Vida.’ It’s designed to move Ricky into the mainstream. ‘La Vida’ was definitely trying to be a pop song. That’s clear. But at the same time, I’ve read in interviews that people like [Sony label executives] Jimmy Ienner and Tommy Mottola don’t want to alienate his core Hispanic audience. And that’s understandable.” (A Spanish-language vocal was recorded at the same time.)

The final mix kept the project completely in the digital domain, done to a Panasonic 3800 DAT deck, with no analog backup. “The thing about analog is that you know the sound is going to come back warmer, with a rounder, fatter low-end sound and smoother top-end transients,” says Dye. “But recording in an all-digital domain, the sound you get out is the sound you put in. You have to make sure that whatever the sound is, it’s what you want it to be, because that’s what digital is going to give you back.”

Child also enjoys working in the hard disk realm, and feels a certain vindication for having supported it for a long time. “We made recording history in this room, doing the entire song on Pro Tools,” he says. “I was committed to Pro Tools long before I met Charles Dye, and I suffered all of the development processes of that format for years. Making Billie Myers’ record was frustrating because the system used to crash nine or ten times a day. And every new upgrade has some kind of bug. But with the 24-bit version, it works now as a way to make records. And we feel like trailblazers because we were with it from the beginning.” 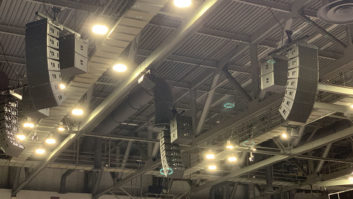