Audio Genetics AlkaliFrom the folks at Gallery Software-who brought you ADR Studio, Turbomorph, Samplesearch and DATstudio-comes Alkali, from the company’s new Audio Genetics (www.audio-genetics.com) division. Shipping now (!) and priced at $299, Alkali is an automatic looping application that instantly fits loops to any tempo, with no time-stretch artifacts, while offering independent control of pitch, quantization, tempo, varispeed and swing. The program includes a CD-RoM of REX-format loops, but best of all, Alkali is designed to integrate with Digidesign’s Pro Tools 5.0-including neat tricks such as on-the-fly loop creation, spotting directly to a Pro Tools track and rendering loops in SDII format-making it a “must have” for any PT user.

Lexicon 960LLexicon (www.lexicon.com) debuted its new flagship, the 960L Multichannel Digital Effects System, based on an outboard reverb CPU linked to a new, advanced LARC2 remote and a 24-bit, 8-in, 8-out architecture designed specifically for surround mixing for music, broadcast and film/video post. See the “Technology Spotlight” in last month’s Mix for more information.

Midas Heritage 1000Midas (www.midasconsoles.com) kicked off its 30-year anniversary celebration with the launch of the Heritage 1000 live performance console, offering a small footprint for applications where space is at a premium, such as theaters or remote trucks. Available in 24- to 56-input frames, the 1000 features XL4 mic preamps, the 4-band XL3 EQ, ten aux sends, ten subgroups, input meters on all channels and a comprehensive 400-memory automation system with control of routing, auxes, inputs, subs, etc. An audio-follows-video option is available for broadcast applications.

Scarab Trimension 1Need to mix in surround but love your older console? one solution is here in the form of the Trimension 1 from Scarab Technology (www. scarab-technology.com). The system consists of a four-rackspace I/o and DSP unit and a portable 3-foot-wide control surface having 16 assignable channel strips with moving faders, panning joysticks, status LCDs and rotary knobs for access to as many as 128 inputs. Each input has divergence, image width, image spin, LFE level, external MMC or RS-422 machine control, monitor system setup, etc.-all fully automatable and controlled without leaving the sweet spot. Simply patch the direct outs or insert sends from your board to the I/o rack (analog via 24-bit/96kHz ADCs or TDIF digital), and connect your surround monitors and mastering deck. Prices start at $35k for a 64-input system.

Sintefex FX 8000 ReplicatorNow shipping, the FX 8000 Replicator from Portugal’s Sintefex Audio (www.sintefex.com) is the brainchild of Mike Kemp, who originally conceived the SADiE digital audio editor. This 24-bit/96kHz unit uses dynamic convolution to sample and replicate traditional analog gear such as tube compressors, equalizers, amplifier distortion and tape saturation. Both factory and user effects are stored internally on hard disk or offloaded to PC for archiving; the FX 8000 also includes “after effects” such as reverbs, delays and flangers for combining with its replicated sounds. A stereo FX 8000 is $8,495 and is expandable ($3,100/pair, with as many as eight channels for 5.1 or 7.1 use), and makes its official U.S. debut at the SADiE booth at NAB this month.

More, More…More!There were plenty of other hits from AES, so watch our monthly products sections for more audio fun from the Palais des Congres. Meanwhile, EuroEAs returns to Amsterdam from May 12-15, 2001, to Munich on May 11-14, 2002, and back to Paris in 2003 (exact date unconfirmed). Mark your calendars, and start making those travel plans now 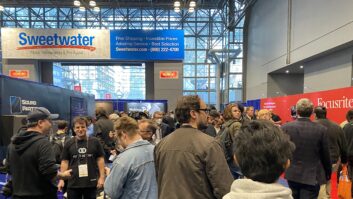 Product of the Week: iZotope RX 10