(www.atrservice.com) was packed with attendees checking out its Aria Super Analog Electronics, an external package for high-performance analog tape transports. Designed by Crane Song’s Dave Hill, the Aria 2-channel or 8-channel-plus-timecode record/playback electronics are compatible with most late-model transports from Studer, Ampex, Otari and MCI/Sony. ATR also showed the Ampex/Aria ATR-108C, a convertible multiformat machine that supports 16/8/2-track recording on ½, 1 or 2-inch tape, for tracking rhythm sections or as a monster stereo (or multichannel) mixdown machine.

Anyone on a budget looking for a big sound and warmth that only ½-inch 2-track can deliver should look into the MX5050 BII Phat from JRF Magnetic Sciences (www.jrfmagnetics.com). After years of requests, JRF is now offering the custom transport, electronics and head modification package that allow the workhorse Otari MX5050 BII deck to run ¼-inch tape.

Audicon Design Labs (www.audicon.com) and Flux Magnetics (www.fluxmagnetics.com) developed the Programmable Padnet for the Ampex ATR-100, intended to simplify the recording technician’s job by automating the ATR-100’s equalization alignment procedures. A plug-in replacement Padnet with three push-buttons and 18 LEDs allows for a complete set of alignments, or via a simple RS-232 connection to a PC running a Windows application, EQ settings can be saved/recalled, allowing the operator to store settings unique to a given tape or head stack.

How high is high enough? Sequerra Audio Labs’ (www.sequerra.com) Model 1070-A mic preamp has a bandwidth extending beyond 400 kHz! Housed in a 3.5×10-inch aluminum tube, the single-channel 1070-A can strap to a mic stand for short mic-to-pre cable runs, or mount in a rack with space for up to four preamps. The 1070-A module is $1,500; a power supply to drive four preamps is $1,000. Focusrite’s (www.focusrite.com) ISA 220 Session Pack puts a mic preamp, direct box input, parametric and shelving EQ, compressor, limiter, de-esser and optional 24/96 digital conversion into a single $2,295 unit. Pendulum Audio‘s (www.pendulumaudio.com) Quartet offers a similar package with a tube mic pre/DI, optocompressor, and 3-band EQ and de-esser, but sans the digital out. GML‘s (www.georgemassenburg.com) single-channel Model 2020 is a combo preamp/EQ/dynamics box based on the 8300 preamp, 8200 parametric EQ and 8900 dynamics processor, providing flexible routing and sidechain insertion capability.

Chandler Limited‘s (www.chandlerlimited.com) line of single-rackspace re-creations of classic Neve circuits includes the LTD-1 (a 1073-type EQ/preamp) and the LTD-2 — a 2254-style compressor. The versions are similar, but offer enhancements such as more HF/MF/LF points on the EQ and wider attack/release times on the compressor. Another take on the 1073 theme is the MP-2NV “Mercenary Edition” from Great River Electronics(www.greatriverelectronics.com), which is based on Dan Kennedy’s take on the venerable Neve 1073, with some suggestions from Fletcher (of Mercenary Audio) thrown in. The 2-channel unit lists at $2,499. High-performance studio gear from Stella Custom Electronics (www.stellacustomelectronics.com) includes the C1 compressor, a $4,850 four-rackspace stereo compressor designed for mastering, the $1,750 RP-1 Reference Monitoring Preamplifier and the $1,000 HP-1 Reference Headphone Preamplfier. D.W. Fearn (www.dwfearn.com) unveiled the VT-5 ($6,600), a stereo version of its passive Tube LC Equalizer.

Big sound in little boxes? Everybody needs bass, and dbx (www.dbxpro.com) brings back the low end with its Model 120a Subharmonic Synthesizer. This upgrade of the classic 120XP creates a modeled bass note exactly one octave below the bass in the original signal. Summit (www.summitaudio.com) enters the half-rack market with the $495 TD-100 direct box, which combines a 12AX7A/ECC83 tube circuit with a discrete transistor output stage. Summit’s TLA-50 Tube Leveling Amplifier ($695) has independent attack/release/gain/gain reduction controls, sidechain access, and is linkable for stereo operation. Also on the half-rack, the $299 PreSonus(www.presonus.com) DigiTube combines a single-channel tube preamp with 3-band sweep EQ and 44.1/48kHz coaxial S/PDIF 24-bit digital output.

We peeked behind the curtain to preview what Genelec (www.genelec.com) has in store, and it’s big. We can’t divulge any details now, but there’s gonna be a whole lotta shakin’ goin’ on at Genelec’s booth at NAMM. Stay tuned…

Westlake Audio (www.westlakeaudio.com) followed up its 2001 TEC Award-winning Lc5.75 speakers with the Lc4.75, a mini-monitor with a 4-inch woofer and ¾-inch soft-dome tweeter in a compact cabinet. Retail is $899/pair.

Coleman Audio (www.colemanaudio.com) has all kinds of useful Swiss army-type products for monitoring. The M3PH DAW Control Monitor ($699) has switching for four stereo sources, L/R muting, a mono switch, a passive level control, onboard headphone amp, and buttons for selecting from three pairs of alternate speakers. The SR5.1 Surround Level Control ($799) has six XLR I/Os with a passive, stepped attenuator volume control and individual mutes for the 5.1 channels.

Transamerica Audio Group (www.transaudiogroup.com) — which distributes AEA, Soundfield, Brauner and Soundelux — seemed like microphone central. Soundelux unveiled the E47, a large-diaphragm, multipattern tube mic that’s modeled to sound like the classic Neumann U47 (retailing at half of the average price of a “vintage” U47). Given Soundelux’s success with its Telefunken ELAM 251-inspired ELUX 251, the new E47 will be a hot ticket. Audio Engineering Associates’ R-440 Stage Prop Mic ($495) is a full-size RCA 44-style mic shell with internal shockmount for inserting a compact side-address mic — it seems live prop use with your own mic can be practical. Brauner‘s Valvet Voice® limited-edition tube mic builds on the popularity of Dirk Brauner’s Valvet and VM1, in a cardioid model with Class-A electronics, custom Lundahl transformers and JAN tubes.

Studio Projects’ (www.pmiaudio.com) B Series of 1-inch diaphragm condenser mics resemble its popular C Series, but at a lower price. The $99 B1 is a solid-state, single-pattern design. The TB1 is a tube version of the B1 at $399 with PS and aluminum carry case. The $199 B3 is a solid-state model with switchable cardioid, omni, figure-8 polar patterns. Designed with a rising 4k to 12k response for diffuse-field orchestra/ambience/choir miking, the omni M960 from Microtech Gefell (www.gprime.com) puts a large condenser capsule into an unobtrusive, small body. Retail: $795. Just over an inch in diameter, the CUB-01 Universal Condenser Boundary Microphone from Sanken (www.aidinc.com) is ideal for concealed miking in broadcast, film, theater, TV and sports, emphasizing dialog while minimizing background noise. After years of building capsules for other manufacturers, David Josephson (www.josephson.com) is getting serious about marketing his own mic designs. The new Series Four offers two small-diaphragm condensers barely larger than the XLR connector they mate with. The C42 cardioid has a fairly flat response; the C41 omni has a broad, HF peak centered around 10 kHz for distance recording.

MXL‘s (www.mxlmics.com) 1006BP adds a twist to the market of inexpensive, cardioid, 1-inch-capsule condenser mics. A 9-volt battery compartment allows the 1006BP to be DC-operated for sampling or remote recording, or phantom powered in the studio. Retail: $119.

Fairlight (www.fairlightesp.com.au) launched its DREAM (Digital Recording, Editing And Mixing) multichannel, multiformat technologies. The stand-alone DREAM Satellite editor features Fairlight’s new Binnacle Editing, which reduces editing keystrokes by 30% to 50%. The DREAM Station offers up to 48-track recording/editing, mixing in any format up to 7.1, moving touch-sensitive controls and a customizable control surface. A fully configured DREAM Console has 48 tracks of Binnacle editing integrated to 96 audio channels, 48 returns and 48 aux inputs (a total of 192 inputs) routed into multiple multiformat buses and a comprehensive monitoring system. For more information, see the “Technology Spotlight” in the December 2001 Mix.

It was standing-room only at the MOTU (www.motu.com) booth for ongoing demos of Digital Performer 3.1, offering unlimited multiple undo, including MOTU’s new “TimeLine” Undo, allowing users to navigate a time-based representation of a session. DP 3.1 also includes waveform editing of surround audio files, and new features for loop-based music production, post-production work and MIDI music production. Behind the scenes, we got a preview of the new 896 96kHz FireWire audio interface, with eight channels of 24-bit analog I/O, eight channels of Lightpipe I/O, eight built-in mic pre’s, AES/EBU digital I/O, wordclock and sample-accurate ADAT sync. Four 896s can be daisy-chained to a single computer for 72 channels of I/O. The 896 comes with AudioDesk workstation software and drivers for all major audio software on both computer platforms. The 896 is $1,295 and ships Q1 2002.

Sonomic (www.sonomic.com) debuted the Sonomic Server Library service, in which the Sonomic Sound Team will digitize, categorize and index your CD collection on a server that is searchable from any networked workstation. Library features include a search by category or keyword (or both), instant preview and import directly into your workstation, and Sonomic’s SoundBay, where users can organize sounds in protected project folders. Sonomic recently signed a distribution deal with Sound Ideas, adding 10,000 effects to the collection, including catalogs from Zero-G, Q Up, Sampleheads, Valentino and more.

EMTEC Pro Media‘s (www.emtec-usa.com) LTO Ultrium Tape backup/storage media can store as much as 200 GB on a single tape, with fast data transfer rates and a minimum storage life of at least 30 years. It’s available in four sizes, with compressed/uncompressed storage capacities from 20/10 GB to 200/100 GB, and transfer rates from 10 MB/s to 40 MB/s. Future generations of Ultrium will feature up to 1.6 Terabytes of storage. LTO is an open-format core technology supported jointly by HP, IBM and Seagate.

MPEG pioneers Fraunhofer Institute for Integrated Circuits (www.iis.fhg.de) was showing its AudioID system, which automatically recognizes and identifies audio data (based on a database of material) and can then generate any required information such as song title or artist name. Applications include broadcast monitoring, music sales and identifying illegal music use on the Internet.

There were plenty of other hip products at AES, and we’ll present many of these in our regular new products columns in upcoming issues. Meanwhile, AES returns to Munich, Germany, for its 112th convention, to be held May 10-13, 2002. The next U.S. show is October 5-8, 2002, in Los Angeles. See you there!

HITS YOU MAY HAVE MISSED

Neutrik (www.neutrik.com) unveiled a new bend on its industry-standard Speakon connectors, with a plug that converts from straight to right angle — and vice versa — without the need to desolder or disassemble the connection. Awesome!

Priced at $300, Reel Drums (www.reeldrums.com) from Wave Distribution is a 15-CD collection of drum loops organized into multitrack Pro Tools sessions (more platforms on the way). The sessions, performed by Joe Franco and recorded by Kooster MacAllister, range from ballads and pop rock to “slamming double-bass grooves.”

For still another approach to rhythm samples, check out The Groove Doctors (www.groove-doctors.com) tracks, which are pre-edited into single-measure “groove,” and include both premixed drum fills/grooves and breakout tracks to mix on your own.

EarQ Technologies’ EAR Q Reference Hearing Analyzer system allows self-testing of hearing from 60 to 20k Hz. The software will then suggest graphic EQ settings to compensate for your individual hearing response while monitoring. Get a demo at www.earq.net. 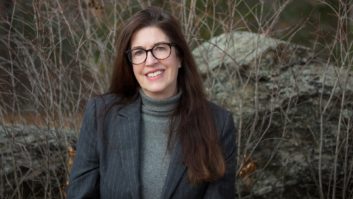