Hillel Resner, longtime publisher of Mix and executive director of the Technical Excellence & Creativity Awards, passed away on July 30, 2021, after a long battle with Alzheimer’s disease. He was 79.

Born in San Francisco in 1942, Resner graduated from  Lowell High School and later attended the University of Nevada-Reno and San Francisco State. From then on, he spent his entire career in the music and recording industries, from co-founding the legendary Straight Theater in the heart of San Francisco’s Haight-Ashbury District in 1966, to owning a record label, to a stint as Carlos Santana’s personal astrologer, to more than four decades as a member of the Recording Academy, serving as SF Bay Area chapter president, National Trustee and National Treasurer over the years.

It was at Mix, however, where  all those skills came together. In 1977, Mix co-founders David Schwartz, Penny Riker-Jacob and Bill Laski hired Resner as the new magazine’s (still a directory of recording services at the time) first ad sales representative. In the mid-1980s he became publisher following the departure of Riker-Jacob, and as much as anyone in the company he was responsible for the meteoric rise of pages and influence at the monthly magazine, presiding over its rise to become the leading pro audio periodical in the world.

Likewise, with Riker-Jacob’s departure he assumed responsibility as producer of the newly created TEC Awards, honoring technical and creative achievement from every corner of professional audio. Under Resner’s leadership, the TEC Awards grew into a must-attend annual night at the AES convention, all designed to celebrate the recording industry. He introduced the coveted Les Paul Award, turned the fledgling production into the nonprofit Mix Foundation for Excellence in Audio and eventually negotiated its sale to the NAMM organization, where it continues to draw crowds to this day.

Resner was a born promoter and a natural-born marketer. As publisher, he ran the business side of Mix, and he had an uncanny knack in understanding how to reach new audiences, from expanding circulation offers to employing new technologies for outreach, including an early example of today’s common e-newsletter, which he first presented to the industry in the early 1990s, sent out over the office Fax machine to 800-plus subscribers.

He was also an intuitive editor at heart, with an eye for detail and a continuous, running sense of the big picture. The pro audio industry underwent dramatic shifts during Resner’s tenure at Mix, and he always seemed to be one step ahead of the changes, especially regarding the adoption of digital technologies.

Hillel Resner was also a friend of mine. I can remember many afternoons in his second-floor office, banging out some goofy copy for last-minute, Burma Shave-style house ads on the final day of shipping, or chatting about a story while looking for some contacts, or simply rapping about business, family and life in general. He was an ethical man who always sought to do the right thing when faced with a tough choice. He made good decisions.

He also had a one-of-a-kind laugh that I will forever hear in my head—oddly maniacal, but at the same time comforting. He was a true innovator in publishing and in marketing. And he loved the pro audio community. I will miss him.

Resner is survived by his wife, Vickie, son Sam, and sister Virginia. 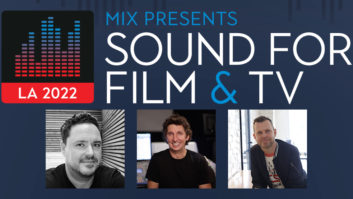