Culver City, CA (September 19, 2022)—The sound team behind the recent superhero hit film, The Batman, will join this year’s Mix Presents Sound for Film & Television event on Saturday, September 24. The panel, taking place in the Cary Grant Theater at Sony Pictures Studios in Culver City, CA, is part of a series of A-level programming presented throughout the day by Avid, a charter sponsor of the event since its debut in 2014, and Westlake Pro.

The Batman is an epic 2022 American superhero film based on the legendary DC Comics character, which finds the famed caped crusader investigating the deaths of political movers and shakers in Gotham City. Join this session to hear a panel discussion from some of the film’s sound design team. Panelists will include Will Files (Rerecording Mixer/Supervising Sound Editor).

“Avid has been bringing outstanding sessions to the event for many years, from Game of Thrones to Stranger Things, and we’re thrilled that they’ve teamed up with Westlake Pro to bring in the sound teams for such a high level of filmmaking,” says Tom Kenny, co-editor of Mix. “Coupled with our expert panel series and Composers Lounge, the audience will have no shortage of expertise on hand.”

The Cary Grant Theater features the largest Avid S6 console in the world. 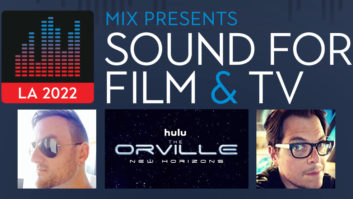